(Plain Press, April 2011) Boy Scout Troop 98, the oldest Boy Scout of American Troop in Cleveland, celebrated its 100th anniversary on February 6, 2011. Scout Troop 98, family, friends and scout leaders from throughout the region gathered at St. Rocco Church on Fulton Avenue for a noon mass followed by a reception in the church hall.

At the anniversary reception, the troop proudly displayed its history with a variety of documents, newspaper clippings and artifacts from its past. The artifact collection included a collection of hand carved wooden neckerchief slides.

Historical documents indicate the troop began officially on November 20th, 1910 during the first year that Boy Scouting was incorporated into the United States. The first scouts called themselves the Wolf and Deer Patrols. The group was formed from the Boys Brigade and The Pilgrim Rifles unit, programs started by Pilgrim Church in the late 1800s to help boys become better men.

Over its one hundred year history, Troop 98 has contributed to a number of community service projects, and introduced over 800 boys to scouting and the experience of outdoor camping. Twenty-one of those scouts earned the rank of Eagle Scout.

In its 100 year history Troop 98 has had only four Scoutmasters – Otto Mayers, Charles Lonsdale, Bill Monks and current Scoutmaster Bob Taylor. This is a testimony not only to the dedication of these individuals, but also to the may adults who have joined to assist them over the years. Scoutmaster Taylor first became involved with Troop 98 in 1964. He has served as Scoutmaster since 1971. Taylor says there are currently seven adults who regularly assist with the troop.

Scout Master Taylor says Troop 98 has a tradition going camping once a month in and around Ohio. Members of the troop thus experience camping in all types of weather. Part of the folklore surrounding Troop 98 is the story of how, during a three-foot snowfall in Cleveland in 1950, the National Guard was sent out to rescue Troop 98, which was camping at the Chagrin Council Camp. The snow was so deep that tanks were used to get through to the camp. When the tanks appeared, the scouts were reportedly puzzled by the arrival of their would be rescuers, but were doing quite fine.

Every few years, the older scouts spend a week canoeing through the Canadian wilderness. In 2003, in honor of the State of Ohio’s Bicentennial, Troop 98 embarked on a 250 mile, nine day canoe trip from Akron to Marietta, Ohio. The trip which started on the Ohio Canal, portaged to the Tuscarawas River, continued south to the Muskingum River and onward to Marietta, was chronicled by Plain Dealer reporter Brian Albrecht and photographer Thomas Ondrey in the August 24, 2003 Plain Dealer Sunday Magazine.

The troop’s history of community service includes countless contributions to Pilgrim Church and to the surrounding community. Projects documented in the troop’s archives include recycling efforts, community clean-ups, helping with maintenance of church grounds, distribution of goods to the community, assembling to help during emergencies in Cleveland, participation in parades, marches, drills and encampments. Troop 98 was a participant in the World Fair held in Cleveland in 1933, and proudly sold War Bonds during World War II.

Boy Scout Troop 98 meets every Tuesday at 7 p.m. at St. Rocco Church Hall, 3205 Fulton Road. Taylor says about 7 adult leaders are involved in leading the troop which currently consists of about 15 boys ages 11 – 18.  At a early March meeting of the troop, adult leaders Bob Taylor and David Kennard ask the scouts present if they were planning on participating in this year’s summer camp. They discuss getting physicals necessary for the camp and raising funds to pay for camping fees.

While noting the $265 cost of the camp, Taylor emphasizes, “No scout has ever not gone to summer camp because they can’t afford to pay.” He explains that the boys can earn dollars toward their summer camp through a number of fundraising opportunities. The next big fundraiser being an April 9th Basement Sale held at Immaculate Conception Church at 4129 Superior. Youths working various shifts at the daylong sale could earn funds to help pay for summer camp.

Kennard discusses various opportunities at the Pioneer Scout Reservation, a camp near the Ohio/Indiana/Michigan border, for the troop members to earn merit badges. He encourages the youths to try for merit badges that involve the outdoors and can’t be easily worked on in the city. Kennard passed out a description of the summer camp activities and the merit badges the scouts could work on.

Taylor and Kennard also discussed what scouts would need to bring to an upcoming water safety training and testing session at Cudell Recreation Center’s pool. The scouts would have to prove their swimming ability and prepare to use various methods of water rescue to help prepare them for summer camp.

While the Boy Scouts listened attentively to the details of how to prepare for summer camp, in the back of the meeting room, younger boys (ages 6 -10) were engaged in a cub scout meeting. The two meetings are held at the same time each Tuesday night.

Cub Master Lora Smith says the Cub Scout Troop serves as a feeder pool for Boy Scout Troop 98. She says cub scouting involves a lot of family activities such as hiking, camping, fishing and sports events. Smith says she tries to find free activities for the boys to attend such as a workshop offered by the Lakefront State Park on what to do if caught on the ice, free Mondays at the Cleveland MetroParks Zoo, free Tuesdays at the Great Lakes Science Museum and a the free Lake Erie Boating and Fishing Festival held each June.

Editor’s Note: Local writer David Distelhorst contributed research to this article. Distelhorst, who earned the rank of an Eagle Scout as a youth, plans to publish Primitive Paradise: a book about Scouting & Cleveland’s Boy Scout Camps. The book will include a history of Troop 98. Distelhorst hopes make information on the book available soon via www.facebook.com 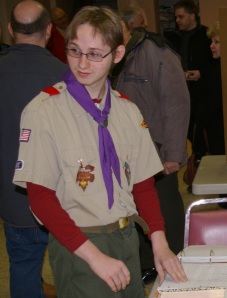 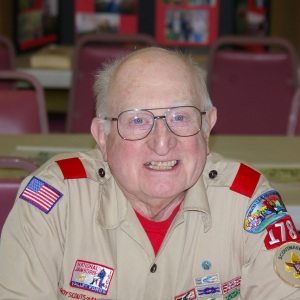 PHOTO BY DANNY KELLY Sunday, February 6, 2011; 100th Anniversary Celebration of Boy Scout Troop 98, St. Rocco Church Hall, 3205 Fulton Road: Scout Master Les Darvis of Troop 178 is one of many scout leaders from throughout Greater Cleveland to join in the celebration. 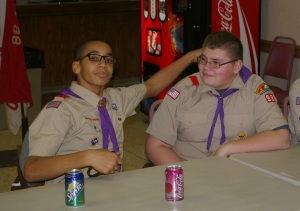