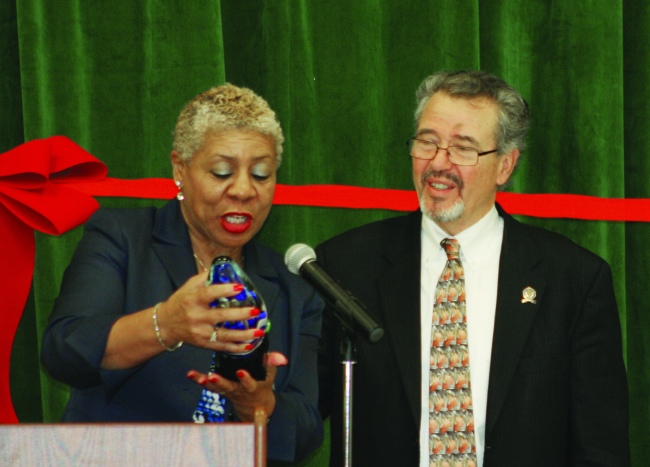 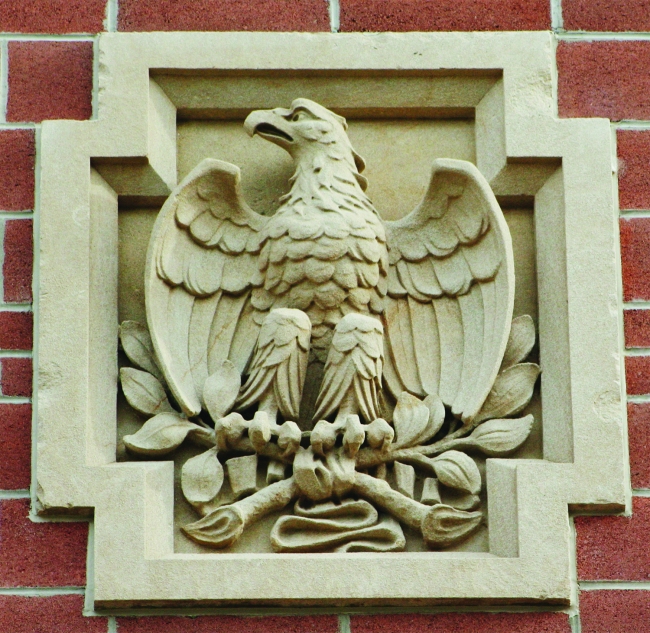 Wednesday, December 4, 2013; Almira K-8 Academy Ribbon Cutting Ceremony, 3375 W. 99th Street: This piece of artwork was preserved from the old Almira School and incorporated into the new building by architects from the firm Madison and Madison. The original Almira School was built in 1916 and designed by architect Walter McCornack.

(Plain Press, January 2014) This school year finds a number of students moving into new schools while the Cleveland Metropolitan School District holds community meetings to consider the extension of the bond issue to help complete its master facilities plan. The school district is also working to fill seats in the new schools and recruit back students it lost to charter schools during construction of the new schools.

This school year, students at Paul Dunbar School moved back to their newly constructed building at W. 28th and Chatham from their swing site at Kentucky School at W. 38th just South of Franklin.  In turn, students from the Near West Intergenerational School (a charter school that has partnered with the Cleveland Metropolitan School District) moved out of the basement of Garrett Morgan School of Science into a new home in the historic Kentucky School Building.

Students from Orchard School are now back at their new school on W. 41st and Bailey after doing a stint at Halle School between W. 73rd and W. 82nd South of Clark Avenue.

Students and community members at Almira School held a ribbon cutting ceremony to celebrate their new school and an end to a multi year odyssey that saw them move twice to different swing space locations far west of their school (first off W. 130th and most recently at Brooklawn off W. 117th).

Meanwhile the New Max Hayes High School building, scheduled to open in the fall of 2015, is rising quickly at West 65th at Walworth (just north of Clark Avenue).

Several efforts are now underway that relate to plans for the future of neighborhood school buildings.  Over the past couple of months, the Cleveland Metropolitan School District held a series of community meetings to seek comments from residents about updating its facilities plan. District officials made it clear that under current population projections for the school district, enrollment projections now predict the district will only have 36,000 students in 2018. The district has already completely rehabbed or built new facilities to accommodate 24,000 students. The State of Ohio will provide 2/3 matching funds only for the amount of students the district is projected to have. Thus the district expects to only be able to build or completely rehab school buildings to house an additional 12,000 students.

Schools that have empty seats create a problem for Cleveland Metropolitan School District. Some new schools fall in this category. For example, the newly built Almira School has enough seats to house 450 students, but currently has only 319 students.  The newly opened Paul Dunbar School has 241 students enrolled with a capacity for 450 students. The Orchard STEM School has 329 students enrolled with a capacity for 450 students. Each empty seat means the district will be forced to either go without matching funds from the State of Ohio when it builds beyond the projected 12,000 seats, or build buildings in some neighborhoods without enough seats to serve the projected population of that neighborhood.

The CMSD department of Family and Community Engagement has hired coordinators to help meet with parents and students in charter schools to persuade them to reconsider their decision and come back to the Cleveland Metropolitan School District. It has developed a portfolio of schools for those coordinators to show to parents to help them find a school that will work for their child. Danny Kelly, formerly a resource coordinator at Lincoln West’s Community Wrap Around Academy, is the coordinator for this effort on the West Side of Cleveland.

Esperanza is the lead agency at three of these schools: Lincoln West, Luis Muñoz Marin and Walton. West Side Community House is the lead agency at H. Barbara Booker. The lead agencies are currently in the process of hiring site coordinators for these schools.  The site coordinators will be charged with doing a needs assessment at each school, and working with school principal, school staff, parents and students to help link the school to resources to fill unmet needs at the school.

School staff, parents and community members from Lincoln West, Marin, and Booker had a chance to meet and discuss qualifications they would like to see in their site coordinators in meetings held in December 2013. Esperanza has already hired a site coordinator for Walton School and expects to hold a community meeting in early January 2014 to introduce the new coordinator to the community.