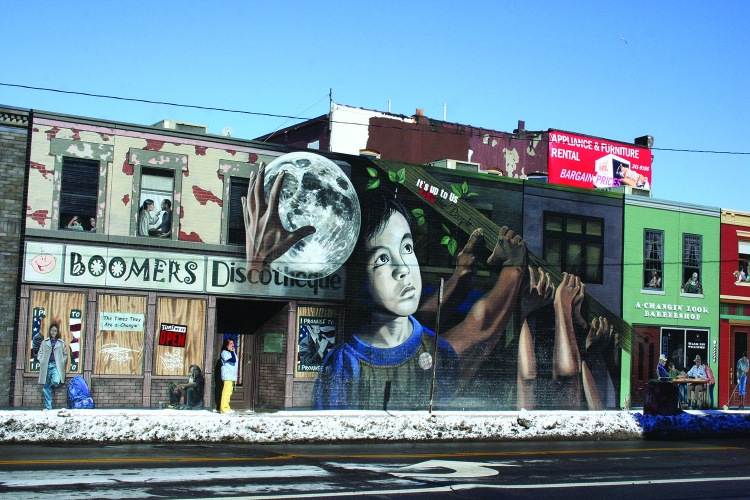 PHOTO BY CHUCK HOVEN
Friday, February 20, 2015; Side of Medical office building on Clark Avenue at W. 25th Street: This mural, Its Up to Us by artist John Rivera-Resto, was cited by Clark Avenue planners as an example of what they would like to see more of in the La Villa Hispaña section of Clark Avenue

(Plain Press, March 2015) Residents and stakeholders received an update on the Transportation for Livable Communities Initiative planning study for Clark Avenue at a February 12th meeting at Pilgrim Church on W. 14th Street.  A final plan is expected to be ready by the end of March. The plan commissioned by Tremont West Development Corporation and the Stockyard, Clark-Fulton, Brooklyn Centre Community Development Office includes Clark Avenue from W. 3rd to W. 65th. Residents can still view the presentation and contribute comments about the plan via the TWDC (tremontwest.org) and SCFBC (dscdo.org/scfbc) websites. Planners will consider comments made before March 6th for incorporation in the planning process.

Matt Hills, of Behnke Landscape Architecture, the consultant on the project shared work his firm and Michael Baker International had done to incorporate comments to date into the planning process.

Hils also talked about breaking up the Clark Avenue Corridor into specific areas with names. Suggestions for named areas include the Towpath Trail Neighborhood (Quigley to W. 25th), La Villa Hispania – W. 25th to Fulton, an the Dream Neighborhood from Fulton to W. 65th.  Hils briefly described the concept for each of the three neighborhood groupings.

Hils said the Towpath Trail Neighborhood would look more like a residential neighborhood with more tree lawns, more trees and stamped concrete made to look like brick to distinguish crosswalks. Bike lanes on Clark in the neighborhood would be linked at W. 11th to the towpath trail and Clark Field and at W. 14th street to a bike lane planned for that street. He said planners recommended that a permanent parking area for residents be placed on a vacant lot in the neighborhood at the South West Corner of W. 11th and Clark.  It was suggested that a parcel at 1095 Clark be converted into a trailhead building possibly to house a bike repair shop and coffee house. Hils said additional off street parking was needed near W. 11th because of demand from the Christmas Story House takes many on-street parking places. At W. 14th he recommended that one of the four corners be redeveloped for multi use retail. Planners recommended artwork and signs for the Bridge over I-71 between W. 14t hand W. 16th, — perhaps Tremont tree leaves and neighborhood signs.

In the La Villa Hispania area along the Clark Avenue corridor from W. 25th to Fulton planners recommended creating an enhanced streetscape, encouraging more murals, ornamental iron work, bright colored paint, decorative lighting and accent pavers – perhaps blue pavers like those used in Puerto Rico. At the intersection of W. 25th and Clark planners recommended some type of gateway element be included.  They suggested painting the street with a pavement treatment to show people it is a hub of an important area.

Several locations in the neighborhood were outlined as possible plaza areas – one at the Northwest Corner of W. 30th and Clark, a second just a little west on Clark in the parking lot in front of the Save-A-Lot. A third location identified for a possible plaza is on W. 25th – just south of Clark Avenue on the East side of W. 25th between Kinkle Avenue and Prame Court. Two sites suggested earlier in the planning process for a plaza – the bank parking lot on the Southwest Corner of Clark near W. 25th and the parking lot near the Southeast corner of Clark near W. 25th were abandoned because area residents and businesses said the lots were often needed for parking.

Planners have high hopes for this area. The plan suggests that the area is ripe for investment in medical office space and multifamily housing.

The third development district along the Clark Avenue Corridor from Fulton to W. 65th was initially called the Stockyard Business District. Hils said discussion about giving it a more colorful name resulted in the suggestion that it be called the Dream Neighborhood District. The area along that corridor of Clark includes the Thomas Jefferson School (Cleveland Metropolitan School District’s school for newcomers which serves students from families new to Cleveland from around the globe.) Hils said the neighborhood could have an international flavor and welcome refugees. He said the three councilmen serving the area –Joe Cimperman, Brian Cummins and Matt Zone – could commit to working with a refugee collaborative to rehab houses to rent to refugees. He suggested the area could attract businesses with an international feel.

A major investment suggested for the western end of this area would be in the brewery building at 6605 Clark. Planners suggest it could be used for office space and meeting rooms.

Hils noted that one of the goals of the Transportation for Livable Communities planning is to help place pedestrians, cyclist and transit riders on a more equal footing with cars on the Clark Avenue corridor. He said the goal of the planning process is to help everyone with input from merchants, residents, transit riders, pedestrians and those that use both cars and bicycles. He said plans for Clark Avenue would also result in a greener street—with the newly designed amenities helping to collect and clean water and slow down its movement into the Sewer System. Hils said this would result in both a local and regional benefit.

Because of differing street widths along Clark Avenue and different requests by residents and stakeholders along the street, Hils said the planners divided the street into segments. He offered a segment-by-segment explanation of the plan, which incorporated some of the public comments to date.

Hils said this area, which is 34 feet wide, currently accommodates parking on one side of the street. The plan recommends that parking be eliminated in this area and bike lanes created on both sides of the street. Hils explained the bike lanes in this area would help to connect the street to the towpath trail at W. 11th and to Clark Field that is to undergo major redevelopment as an athletic complex. It will also connect with bike lanes planned for W. 14th Street, said Hils.

The planners recommended that this area over I-71 be spruced up with some metal signs and artwork to show people it is part of the Tremont neighborhood. Clark Avenue as it goes over I-71 would also have Sharrows painted on the street indicating to motorists that there is a high probability of cyclists on the road and the road should be shared with cyclists.

Hils said this area is the most residential area of Clark Avenue. He noted a major goal of residents was to reduce truck traffic in the area.  The street is currently 38’ wide at this point. The plan recommends that there be two 12-foot wide traffic lanes, one 8-foot wide parking lane on the South Side of the street. The plan also recommends expanding the tree lawn by 5 feet on the north side of the street. The plan recommends the parking lane be designated with a solid white line and bump outs be used to reinforce the width of the road by the parking area. Hils says the narrowed width of the road should discourage truck traffic as well. Planners also designed alternative routes for trucks heading to Steelyard and other destinations by the river, which they hope to have incorporated into directional services such as Google Maps and MapQuest to help reduce truck traffic in this area.

This area would have two travel lanes as well as 8 foot wide parking lanes on both sides of the street. Hils explained the parking was requested to accommodate both parishioners of St. Michael’s Church and the possible reopening of the South Branch Library.

Planners call for this area to have one twelve foot wide travel lane in each direction as well as a 10-foot wide center turning lane for traffic turning onto W. 25th Street. They recommend that on street parking be eliminated in this area. They recommend that the 10’ wide sidewalks be maintained as well as adding an additional six-foot wide landscaped tree lawn on one side of the street to narrow the street.

One resident suggested that since the large parking lots near W. 25th and Clark were no longer planned for use as plaza locations, perhaps some of the parking spots could be designated for public use.

Ward 14 Councilman Brian Cummins suggested that in the area just West of 30th Street buildings no longer using driveway aprons could ask that the area be returned to roadway to allow for more parking spaces. He said another possibility was for multiple businesses to share an entrance and exit so for example four driveway aprons could be consolidated into one. He suggested that by removing aprons that are not being used, consolidating aprons and narrowing wide aprons – additional on street parking spaces could be gained.

In this area, the street is forty feet wide from curb to curb. The plan calls for one 12-foot traffic lane in each direction and an 8-foot wide parking lane on both sides of the street. There would be bump outs to make sure the parking lanes were not used as travel lanes. The exception is the area by the cemetery on the north side of the Clark Avenue, where Hils says parking would not be needed so there could be a green space or a wider sidewalk.

This area of Clark Avenue is only 34 feet wide from curb to curb. Planners suggest on street parking on one side only. Residents report intense competition for parking when students are being dropped off or picked up at Clark School.  Hils suggested that the Cleveland Metropolitan School District plans to build a new building at the Clark school site. He suggested they include a pick-up and drop-off area for students. This, he said, would allow the parking lane to be on the south side of the street to accommodate the businesses across from the school.  Enhancements planned for this area include safer well-marked crossings for pedestrians and bump outs at the crosswalks so pedestrians would have a narrower street to cross.

This area would continue to have two travel lanes and two parking lanes. The exception would be the area under the railroad bridge where there would be no parking and lighting enhancements would be added to brighten the area.