Despite setback, EDEN hopes to proceed with housing for homeless

Posted by plainpress ⋅ May 6, 2015 ⋅ Leave a comment
Filed Under  EDEN, Housing for the Homeless 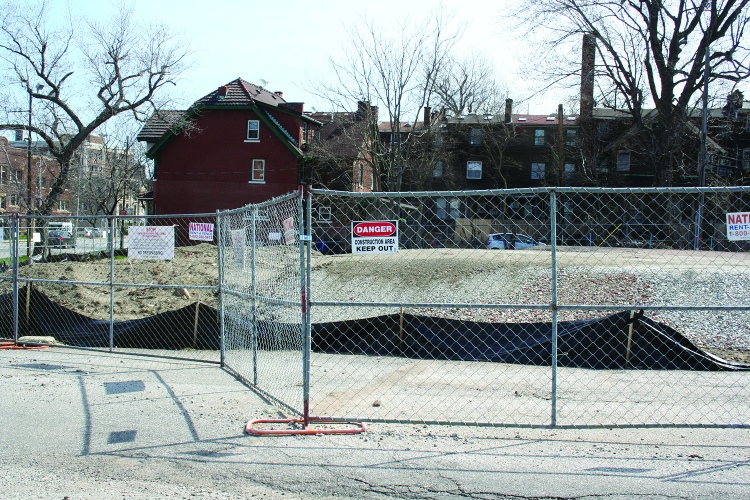 PHOTO BY DEBBIE SADLON
Saturday, April 18, 2015; 8301 Detroit Avenue: The site of a proposed development to provide permanent supportive housing for veterans and the chronically homeless remains empty while plans for the site are revised. Neighbors challenged the original plan for the site in Common Pleas Court. The Court denied variances originally granted to the project by the Board of Zoning Appeals. Eden Inc., which will administer the housing planned for the site, is working with funders to redesign the proposed project so construction can begin in the fall.

(Plain Press, May 2015) Emerald Development and Economic Network’s (EDEN) plans to build a sixty-six-unit apartment building for the chronically homeless at 8301 Detroit Avenue will require changes in order to proceed.

Some neighbors to the east of the development project on W. 81st Street went to the Cuyahoga County Court of Common Pleas to appeal the decision by the Cleveland Board of Zoning Appeals to grant variances necessary for the development to go forward as planned. The neighbors won their case with Judge Pamela A. Barker ruling that the record of the Board of Zoning Appeals did not show that EDEN would experience “unnecessary hardship” or substantial loss of property rights if the variances were denied.

EDEN Executive Director Irene Collins says she believes the project to be an important project for the City of Cleveland and for those who are homeless. She says twenty-five of the sixty-six units in the proposed development will be for homeless veterans and the remainder for referrals from area agencies working with the chronically homeless. She says the project will help the United States meet one of its national priorities to end homelessness among veterans.

Collins says funders for the project have been understanding of the delay in the project and are working with EDEN in support of redesigning the project so it can go forward. She said a number of options are being considered and EDEN hopes to have construction underway by this fall.

Initially, the City of Cleveland Board of Zoning Appeals (BZA), in a July 7, 2014 ruling, had granted two use variances and four area variances from Cleveland Codified Ordinances to allow the project to proceed. Judge Pamela A Barker in a ruling filed with the Cuyahoga County Clerk of Courts on January 27, 2015 reversed the ruling by BZA and ruled that the adjoining parcels owned by 81 Street Properties, LLC McKinley Terrace holding Company, NE Cornerstone Properties, West End Townhouses and Michael Dolezal had standing to appeal the decision. The court said the owners of the adjacent properties demonstrated that granting the variances would directly affect them and cause them unique harm.

The adjacent property owners challenged the project on grounds that its proposed height of 43 feet would block their views and the density of the proposed development would be “an extreme detriment to (their) surroundings, quality of life and property values.”

The proposed height of the EDEN development at 43 feet is eight feet higher than city code for the area, which allows a 35-foot high development. The property is located in a split zoning with part of the parcel in a two family residential area and part in a general retail business district.

The court ruled that EDEN must show it would have practical difficulty in using the parcel without the variances it sought, and the court said EDEN failed to do so. The court also ruled that EDEN knew of the zoning restrictions when it purchased the property and cannot demonstrate “unnecessary hardship” if the variances were not granted.