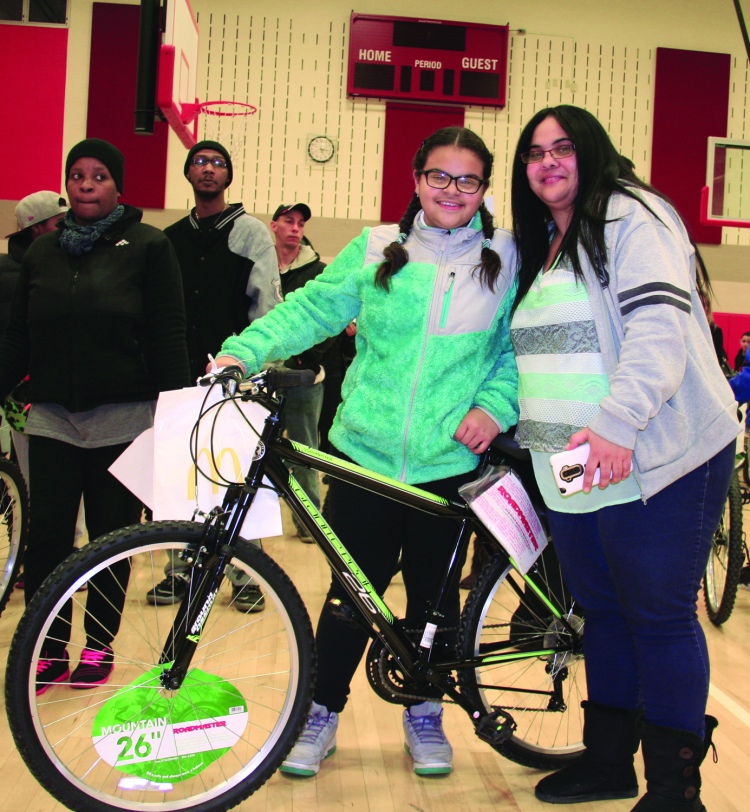 (Plain Press, January 2016) At two Bike Giveaway ceremonies held on December 17th, two hundred and seven Cleveland Metropolitan School District students received a bicycle as a reward for improving their attendance from last school year to this school year.  Herb Washington, a McDonald’s Owner/Operator, organized the McMiracle with H.L.W. Fast Track Bike Giveaway.  H.W. L Fast Track is the name given by Washington, a track and field star, to his McDonald franchise, which has 23 McDonald’s restaurants, the largest McDonald’s franchise owned by an African American.

Inspired by a similar McMiracle program started in Indianapolis twenty years ago, Washington’s partnership with the Cleveland Metropolitan School District offers a great incentive for middle school students to improve their attendance record this school year when compared to last school year. Over 1,500 students qualified by improving their attendance this year and drawings were held to pick one 6th, 7th and 8th grade student from each K-8 school in the district to receive a bike.

At the second bike giveaway of the day held at Paul L. Dunbar at W. 28th and Chatham in the Ohio City neighborhood, Washington stressed the importance of education in his life and his belief in the importance of getting kids to school. He told the crowd, assembled in the gym, “It is my expectation to double the number of helmets and bikes for next year.”

Washington thanked a number of businesses for their donations toward purchase of the bikes, thanked students for their efforts to get to school and said he was especially proud of parents for their role in getting students to school. He noted his own childhood in Flint Michigan, which he termed “a tough city.” He noted the difficulties parents can face, but encouraged parents saying, “You can be successful.”

Cleveland Metropolitan School District (CMSD) Chief Executive Officer Eric Gordon thanked Washington for the gifts for children, which were being used by the district as leverage to help with the “Get 2 School, You can make it” campaign. Gordon said that when you look at the academic achievement and attendance, academic achievement “always comes down to attendance.” He said students who miss less than ten days of school a year are 9% more likely to pass the third grade reading test. He noted that students that missed fewer than 10 days of school per year also performed substantially better on both math and reading tests than students who have missed 10 or more days.

Gordon said the goal set by the CMSD was to have 10% fewer kids miss 10 or more days of school this year. In the first quarter of this year, the school district had 1,117 more children on track to miss fewer than 10 days of school this year than at the same time last year. He said that was 9.99% better than last school year – just short of the goal for the year. However, he said that the second quarter stats are looking good with just a few days left in the quarter he said the district is “on track to beat the 10% mark.”

Gordon thanked Washington on behalf of the school district for the bikes, helmets and gift certificates to McDonalds that were helping to keep students on track to better attendance. Gordon also thanked the Ohio City Bicycle Coop for offering each new bicycle owner a free bicycle safety lesson.

Again stressing the importance of attendance, Gordon praised the teaching staff of the CMSD and sent a message to students saying, “Educators are getting the job done teaching our kids, but they can’t teach you, if you are not here.”