PHOTO BY CHUCK HOVEN Saturday, March 25, 2017; Clean-up of W. 73rd Community Coalition lot at W. 73rd and Neville: Dion Pride readies a bag as Louis Travels rakes up debris. Pride and Travels are members of Unity Through People. The vacant lot they are cleaning is a former parking lot for the Cleveland Folding Carton Division of Simkins Industries. PHOTO BY CHUCK HOVEN 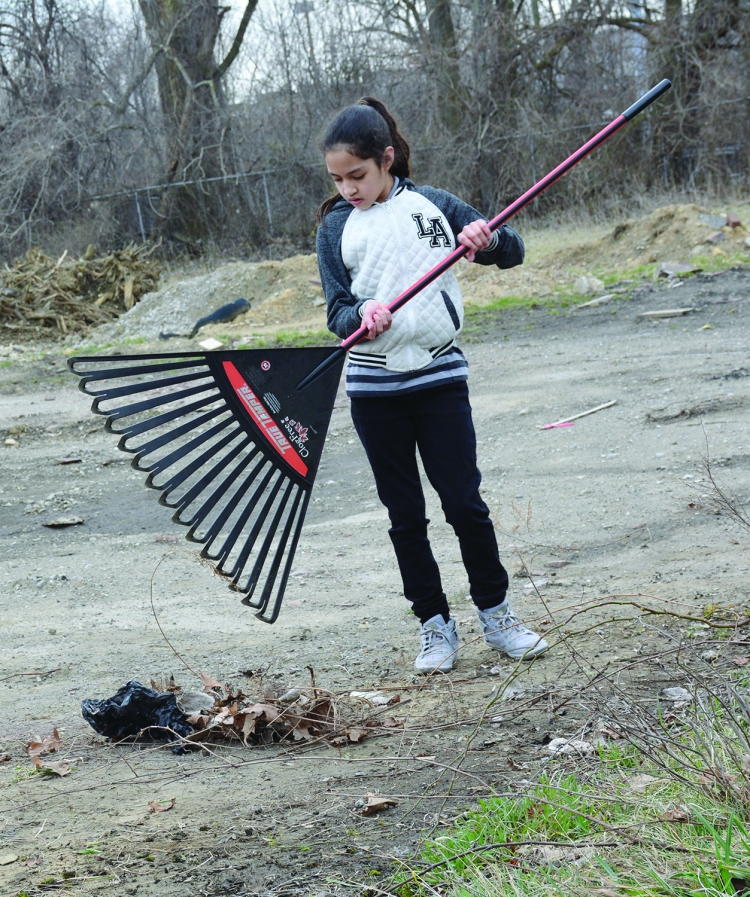 PHOTO BY CHUCK HOVEN Saturday, March 25, 2017; Clean-up of W. 73rd Community Coalition lot at W. 73rd and Neville: Rachel Diaz rakes up debris in the vacant lot. Rachel and her siblings helped clean up the vacant lot in their neighborhood. The Diaz children shared some ideas as to how they would like the lot to be used. Some of their suggestions included: a dog park, a playground, a community garden and houses.

(Plain Press, May 2017)       Several events in late March and early April have led to new hope for the W. 73rd Community Coalition in their effort to have the vacant field at W. 73rd and Neville returned to a state where it is once again usable. One such event was a clean-up by volunteers, and another was a clean-up of large construction debris by Cuyahoga County.

The W. 73rd Community Coalition once held meetings and picnics on the vacant lot on at W. 73rd and Neville, says Donna Brooks, a long-time member of the coalition. Brooks has pictures of the lot, a former parking lot for the Cleveland Folding Carton Division of Simkins Industries, covered with green grass. Brooks says it was before the lot was used as a staging area for Dominion Gas Company to put in new lines and for the reconstruction of W. 73rd Street.

After the construction crews left the scene, the lot was filled with construction debris. Ruts from heavy vehicles made it impossible to mow or maintain.

On March 25, a small but dedicated group of volunteers took on the task of raking and bagging litter and debris on the lot. The effort was organized by Omar Medina, an associate pastor at Jesus es la Respueta at W. 85th and Madison and a candidate for the Ward 14 seat in Cleveland City Council.

Participating in the clean-up with Medina were the Diaz children – Ilan, Rachel, Amanda, Eliana and Jonathan and their uncle Luis Vizcarrondo. Reinforcements to the clean-up came in the form of two members of Unity Through People – Dion Pride and Luis Travels – who came across town to help with the clean-up. The group used gloves and rakes to clean up and fill many bags of trash and debris from the field.

The Diaz children shared some ideas about what they would like to see in the lot in their neighborhood. Their ideas included: a dog park, a community garden, a playground and houses.

However, when the clean-up was completed the lot was still filled with ruts from the heavy vehicles and huge chunks of concrete from discarded pieces of the street, curbs, and sidewalks.

This is where the efforts of Ward 14 Councilman Brian Cummins came into play. Cummins said that two different contractors had leased the land – Dominion to put in gas lines, and contractors working for Cuyahoga County to reconstruct W. 73rd Street.

Cummins says the Land Bank Management in the Department of Public Works should have had inspectors go out and inspect condition of the lot before and after leasing the lot to each of the two contractors. He said the inspectors should never have allowed a contractor to leave the property in that condition without clean-up following the completion of their work. Cummins says this is a chronic problem in most public works projects in Cleveland.