Posted by plainpress ⋅ June 13, 2017 ⋅ 1 Comment
Filed Under  Community Forum on Education, State of Ohio Board of Education 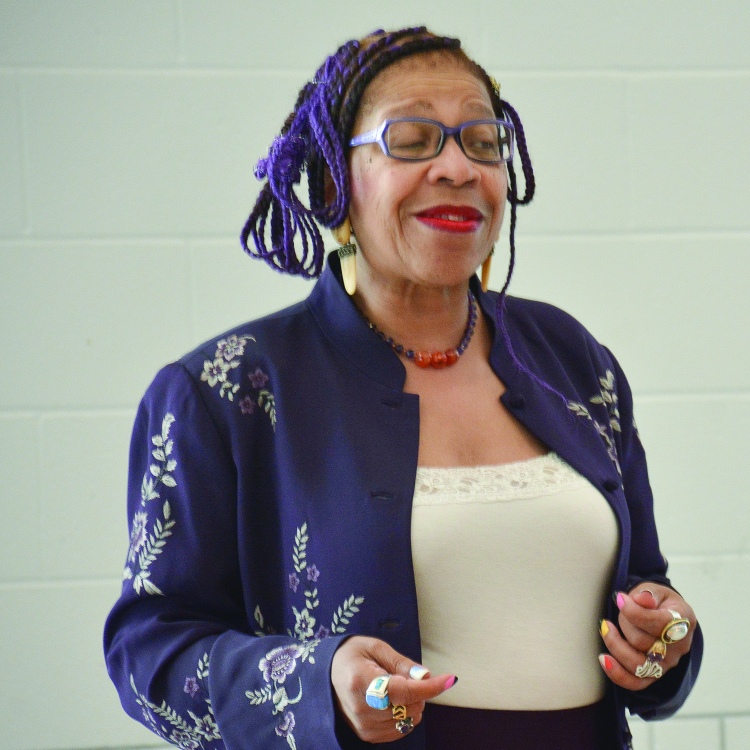 PHOTO BY CHUCK HOVEN Monday, May 22, 2017; Community Forum on Education, Max Hayes High School, 2211 W. 65th Street: State of Ohio Board of Education Member Meryl Johnson sings a song about children’s educational aspirations to the tune of Amazing Grace at the opening of the forum.

(Plain Press, June 2017)      At a May 22nd Community Forum on Education held at Max Hayes High School, over thirty educators, parents and community members from throughout Greater Cleveland had an opportunity to offer their input on the State of Ohio’s educational policy. The forum, hosted by Ohio State Board of Education Member Meryl Johnson and District 45 State Representative Teresa Fedor, offered an overview of the Federal Every Student Succeeds Act (ESSA) and a discussion on how Ohio should respond to the requirements of ESSA. Among those attending the forum were State of Ohio House of Representative members: Nickie Antonio, Stephanie Howse, Kent Smith and Martin Sweeney.

State Board of Education Member Johnson and Representative Fedor explained that ESSA, passed by Congress with bipartisan support in December of 2015 during President Barack Obama’s administration, transfers a good deal of power to determine educational policy back to the states. Currently, the State of Ohio must submit a State Plan to the federal government by September 2017.

Representative Fedor said, the State Legislature’s Education Committee is now “at a point where they want to listen. They want to hear from teachers and parents throughout the state.” Fedor noted that the flexibility of the new law allows for more local control and flexibility. She said, “Tests don’t have to be standardized tests.” She urged those present to offer their input.

One educator in the audience asked what happened to the input already provided to the State of Ohio at 18 regional meetings held last year where people overwhelmingly asked the State of Ohio to reduce the number of tests. State School Board Member Johnson said that this second round of meetings is now being held because ideas presented at earlier meetings did not show up in the draft and that outraged stakeholders. The new Ohio Superintendent has delayed submitting the plan until September giving time for ideas from stakeholders to be incorporated in the plan.

Those present then broke into groups to offer their input on several areas including: standardized testing, what school improvements are needed; what non-academic support services schools should provide; and what academic supports for educators and students are needed.

Comments included that there was too much emphasis on standardized tests, the tests were always changing so they could not be compared from year to year, people making decisions about what is on the tests were not educators, one test cannot be used to fairly serve all groups, there are too many tests, and that the number one influence on the test scores is the family income.

Participants noted that School District Report Cards only show the economics of that school district. They called for the removal of school grade cards as they are no longer a federal requirement. There was some discussion about a testing industry that is reaping financial reward from the proliferation of tests that just show the real problem is not what happens in the classroom, but the need to address poverty.

Some called for the elimination of all high stakes standardized tests. Proponents of eliminating the tests, said the time spent on test preparation takes away from teachers’ ability to teach. They said we should trust teachers to develop their own assessments of students.

A big item called for to improve the schools was to fully and equitably fund schools. There was a call for resources for the most vulnerable students to be sustained and increased.

State School Board Member Meryl Johnson noted the DeRolph Case, where the Ohio Supreme Court ruled that unequal school funding in Ohio, based on property tax, was unconstitutional. She noted that despite the unequal funding, all students are still required to pass the same tests.

Participants differed on whether it was a good idea for principals to have more autonomy. Some said independence from the school district allowed principals to develop schools with the resources they preferred. Others warned that district resources were needed and that independent principals provided a pathway for privatization of schools.

Participants felt that increasing extracurricular activities for students would lead to more excitement from students about attending school and learning.

Academic support services that participants thought would help improve schools included time built into teachers’ schedules to work on collaboration; individualized professional development for teachers; more pedagogy training for teachers – exposure to how students learn today; instruction on how to teach in a more collaborative manner;  more and better classroom technology – including increased band width; and more adults assisting in the school and the classroom for the benefit of the children.