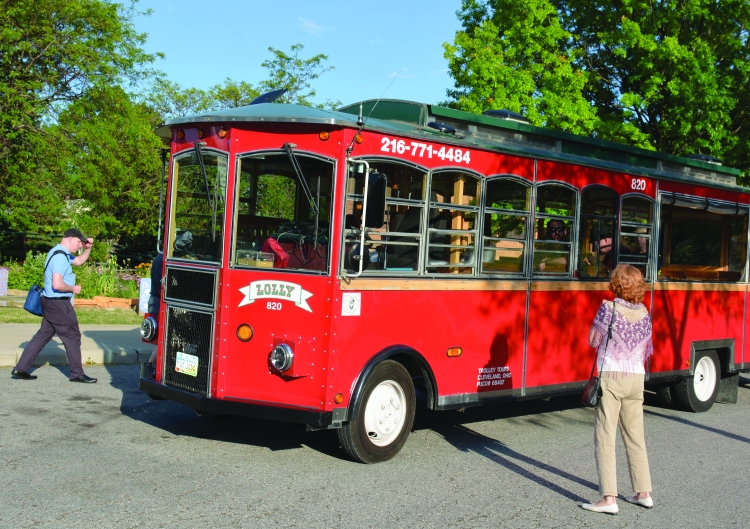 (Plain Press, July 2017)     A study commissioned by the Northeast Ohio Areawide Coordinating Agency (NOACA) scored the area around the West Boulevard/Cudell Regional Transit Authority station as one of the top three areas in the city of Cleveland in terms of being ready for Transit Oriented Development. Representatives of AECOM, the company which did the study, presented their findings to a group of Cudell neighborhood residents at the Cudell Recreation Center on June 20th. Their presentation was followed by a Lolly the Trolley tour with Cudell Improvement Executive Director Anita Brindza sharing insight into the development potential of the area surrounding the RTA station.

Kenneth Sislak, Vice President and Manager of Transit Rail Planning for AECOM said that for development around a transit station or bus route to work, several factors should be present. There should be a high frequency of ridership, a rich mixture of land uses with a good mixture of people coming and going, a great public realm – well maintained sidewalks, curbs and housing that is up to code.  In addition, Sislak said a fresh approach to parking is needed to encourage transit oriented development. He said parking should not be on the street. The parking spaces now on the street should give way to bike lanes, wider sidewalks and pedestrian scale amenities.

Sislak said the area around the Rapid Station at West Boulevard and Detroit showed potential for development of 380-600 new homes by 2026; 1.2 million in new office space by 2025 and had untapped retail space demand. The area was deemed to be the most-ready for investment when compared to the other top sites E. 116th and Shaker Blvd and Slavic Village.

Two parcels owned by the Regional Transit Authority were presented as possible sites for development. One is the current parking and bus turnaround area at the West Boulevard/Cudell Transit Station. The other site is just across the tracks from the station on a former Nickle Plate Railroad property now owned by RTA.

One concept involved creating a four-story building on the current RTA parking area with street level retail space and 60 apartments above. There would be fifty parking spots for the building as well as 14 curb spaces for the businesses. Under this plan, the RTA park and ride area would move across the tracks. Sislak said RTA did not like this plan because of the increased distance its riders would have to walk from their cars to take the rapid.

A second plan involved placing three buildings on the RTA parking lot area with a similar amount of first floor retail space, with 100 apartments above. The plan would place 100 parking spots for residents in a garage below the apartment buildings with 14 curb spaces for the retail businesses. The plan would include 50 spaces for RTA patrons to park on a surface lot. Under this plan, the second parcel across the tracks would be used to house a sixty-unit apartment building with surface parking. The plan calls for Berea Road to be straightened to make for a 90 degree turn at Berea and Detroit.

One resident said if she was to downsize and move into the new development, she would like to see the apartments be affordable to a middle-income person. She also said she would prefer a grocery store downstairs so she can walk and get her groceries when she is in her eighties. Sislak said the current plans call for just small retail spaces, not enough to accommodate a grocery store.

Sislak said the development would help RTA capture increased value from its property. He outlined some potential funding sources to be pursued for the project and urged Cudell Improvement staff and residents to beat the drum, advocate for the project and sell it to the development community. Sislak encouraged pursuit of zoning changes along Berea and Madison to make the area mixed use rather than just industrial.

In the Lolly the Trolley Tour that followed the presentation, Cudell Improvement Executive Director Anita Brindza pointed out some of the potential in the area. She noted the City of Cleveland is building a new Animal Care and Control Center at 9203 Detroit Avenue, just east of the rapid station. She expected the new facility to have a good number of employees, visitors and volunteers coming and going each week. It is expected to be completed in about 18 months, said Brindza. West of the rapid station going toward W. 117th and Detroit, is an area which has some established high density residential units as well as thriving businesses.

Another amenity coming to the Cudell neighborhood is a new Lucky’s Grocery Store at W. 117th and Clifton, currently under construction, Brindza noted.

Brindza pointed out a current example of Transit Oriented Development in the neighborhood – A Place for Us – new apartments across from the W. 117th and Madison Rapid Station.

Brindza noted several empty or underutilized parcels on the Detroit, Madison and Berea Road corridors during the tour. Many of the parcels she described as having owners, not currently interested in selling their properties.

Brindza noted the former Midland Steel site on Madison at Berea Road which the City of Cleveland has cleaned up and hopes to market to an industry that will provide at least 10 jobs per acre at the 20-acre site. She noted industries along Berea Road with varying amounts of employees.

Traveling along Madison, Brindza noted plans to build a new Marion Seltzer School on the school property on W. 98th. She also said that since the RTA stopped running the Madison bus, many RTA riders cut through from Madison to Detroit to take the Detroit bus or the Rapid.