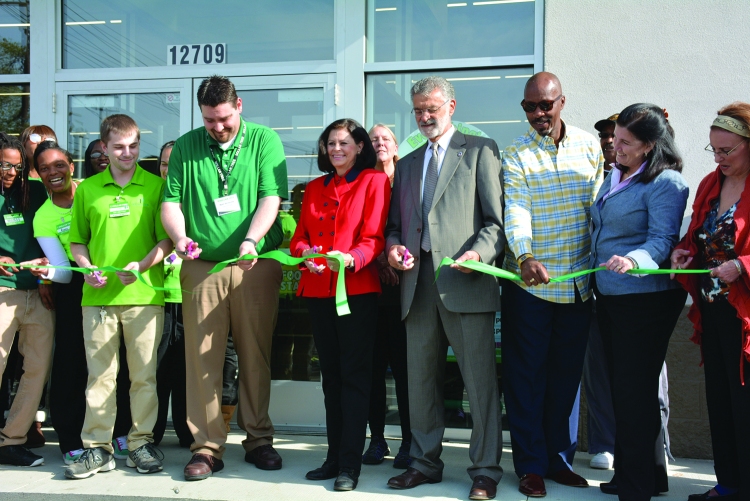 The staff of the new Dollar Tree store joined with Westown Community Development Corporation staff, Councilwoman Dona Brady and Mayor Frank Jackson to cut the ribbon on October 21st for a new store at W. 128th and Bellaire.

The new Dollar Tree store has some unique features that resulted from collaboration with the community. Six four-foot by five-foot LED illuminated wall mounted light boxes on the Bellaire Road side of the building feature historic neighborhood photos. Longtime resident and local historian Ellie Mapson and Director of the Westpark Historical Society Ralph Phigston provided input in the selection of the photos for the display boxes.

Students at nearby New West Tech High School at 11801 Worthington Avenue digitalized and enhanced the historic images under the direction of photography and graphic design teacher Deron Leutenegg. Developers Mark and Kelley Jablonski integrated the photos into the wall mounted light boxes. The photos will be maintained and replaced periodically by Westown Community Development Corporation.

The bicycle racks by the main entry of the store are the result of another collaborative effort. The bicycle racks were sourced from Metro Metal Works, a trade-building program for homeless men and those re-entering the workforce from prison. The program is administered by Lutheran Metropolitan Ministries.

The site preparation for the new store was especially challenging. Ward 11 Councilwoman Dona Brady changed the zoning for the site in 2013 to local retail, in hopes of attracting retail business to the historic African American community. Cuyahoga County Land Reutilization Corporation and Westown Community Development Corporation worked on the land assembly. During preliminary site evaluation, two underground, gasoline storage tanks from a former gas station were discovered on the site. The project had to be put on hold for two years while the City of Cleveland Department of Economic Development and the State of Ohio’s Abandoned Gas Station Cleanup Program worked to clean-up the old gas station site.