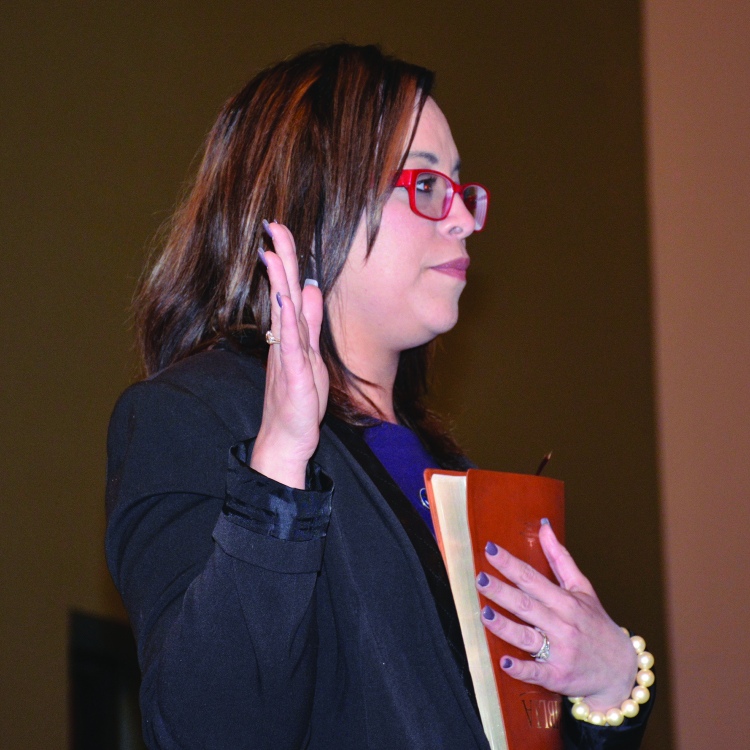 (Plain Press, March 2018)     Ward 14 Councilwoman Jasmin Santana, the first female Hispanic to be elected to Cleveland City Council, was sworn in at a Faith Swearing In, Ceremony held in the Family Ministry Center on Fulton Road, on February 23, 2018.

Following the swearing in by Rev. Eliezer Negrón of Iglesia Segunda Corintios, Councilwoman Santana thanked those in attendance for their presence and shared some thoughts.

She expressed the importance of holding this ceremony “around family, friends and people that elected me–in the Ward that created me.”

“Deciding to run – it didn’t just come to me a year ago. It’s something I’ve been fighting for many years,” said Councilwoman Santana.

Santana then related that her motivation for running for office came from visiting the homes of women in the neighborhood when working for Metro Health Medical Center. She said she witnessed the depression of women who did not have enough food to feed their families. She saw the impact of lead poisoning on neighborhood children. Santana spoke of the high infant mortality rate in the neighborhood as well as the increasing number of deaths from opiate overdoses.

She said it weighted heavily on her when she returned home to her family where there was food to eat, when she had just left a family with no food.

Santana questioned, why there were no parks in the neighborhood and why children committed suicide at age 12.

“I couldn’t take it anymore. I don’t like politics, but understood this role would be influential,” said Santana about her decision to run for City Council.

Santana said, “Sometimes, looking at the plaque with my name on it in the City Council budget hearings, I can’t believe little old Jasmin Santana from the neighborhood, raised by a single mom, is sitting here.”

Santana thanked God not only for the good things, but for the bad things that brought experience. She promised to work hard to make sure families in Ward 14 have the resources they need to bring them forward. “I will work hard every day to make sure our families have education, healthy homes, and jobs,” said Santana.

Santana thanked the team of supporters that helped her win the election for believing in her. She said, “Together we are going to move this community forward. We are going to rebuild Ward 14.”

It was clear from the ceremony and those that spoke that much is expected from Councilwoman Jasmin Santana. In a reflection, before the swearing in, Rosa Beltré, a Missionary of Iglesia Roca Eterna and Executive Director of Ohio Alliance to End Sexual Violence, drew a parallel of today’s circumstance to the circumstances faced by Esther in the biblical story. Just as Esther was called by God to rescue her people from extermination by the powerful Persian King Ahasuerus, so too “Jasmin, for such a time as this, has been chosen,” said Beltré.

Speaking of the calling and mission of Councilwoman Santana, Beltré said, “It will not be easy, but you will have the prayer and support of a community.”

Local politicians spoke of the role Councilwoman Santana is taking on.

Dennis Kucinich, a candidate for governor, praised her “drive, determination and willingness to serve.” He told Santana that in the “civic community, everyone supports you and wants you to succeed as the first Latina in the history of the City of Cleveland to serve in City Council.”

Councilwoman Santana invited her colleague, Ward 7 Councilman Basheer Jones, to the podium, introducing him as the first Muslim to be elected to Cleveland City Council. Jones told those present, “You have someone down there that is fighting on your behalf.” He said he hoped to work with Santana to build a bridge between the black and brown community.

Ward 9 Councilman Kevin Conwell praised Santana for coming prepared to Cleveland City Council committee meetings. Conwell said Santana has genuine concern for people and he has watched her fight for her community and for the city of Cleveland. “I see great things for you,” he told Santana.