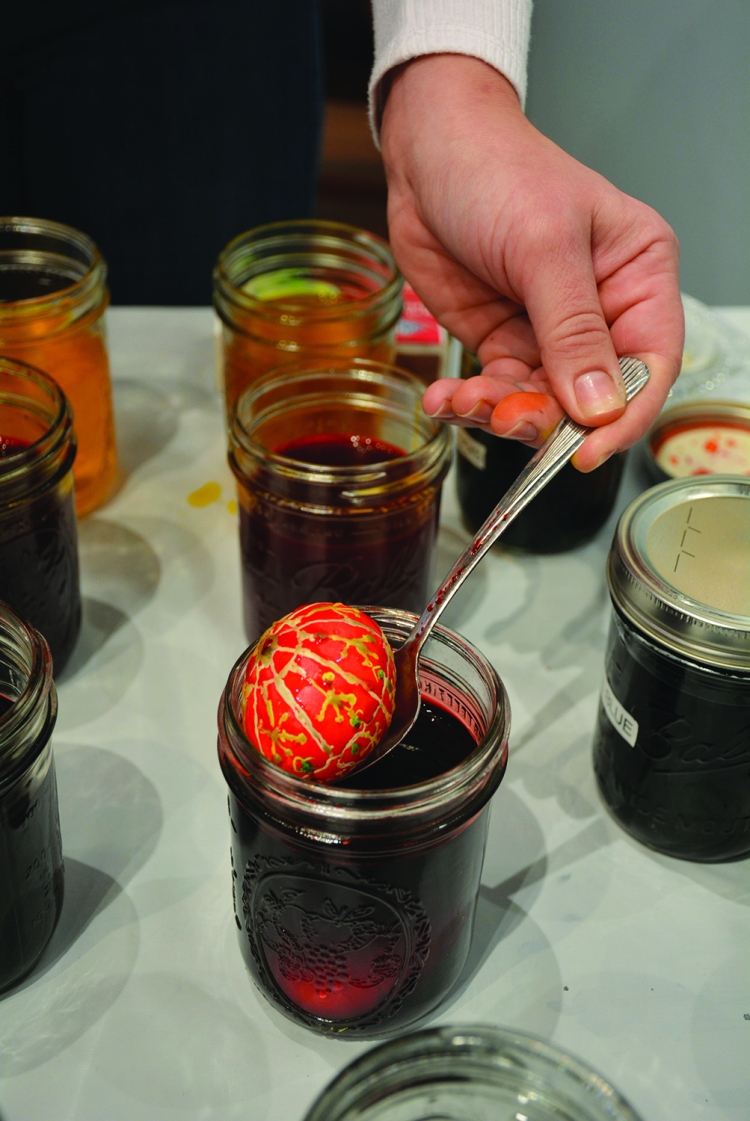 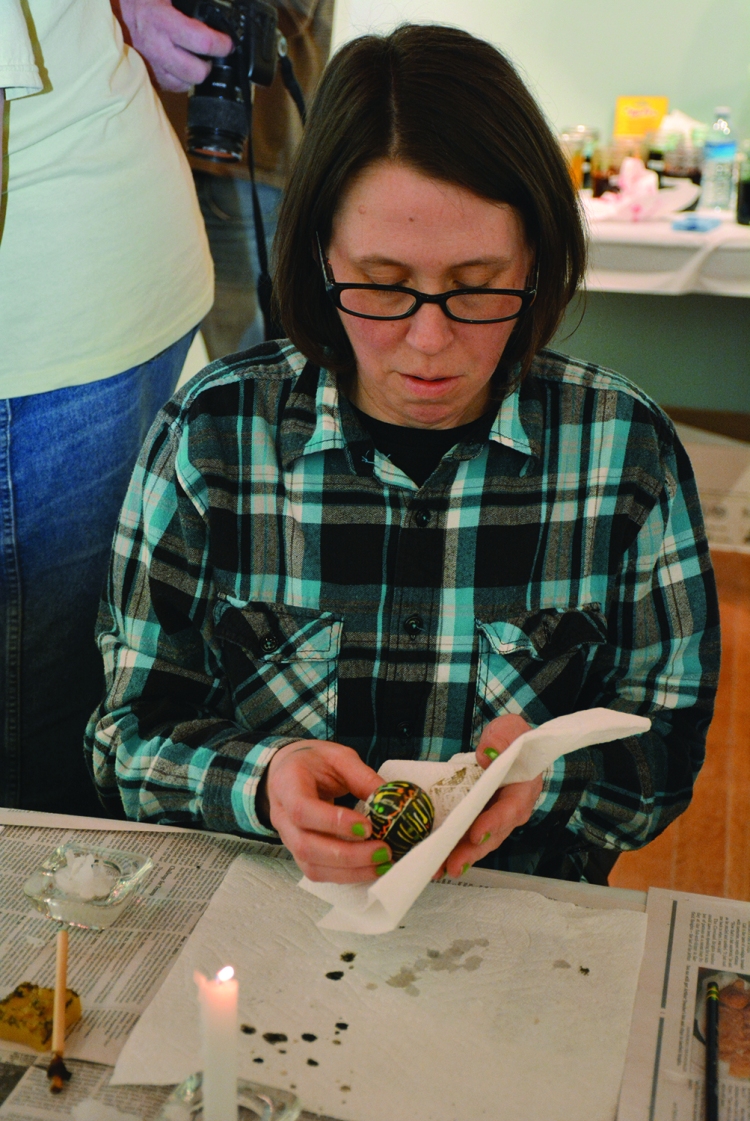 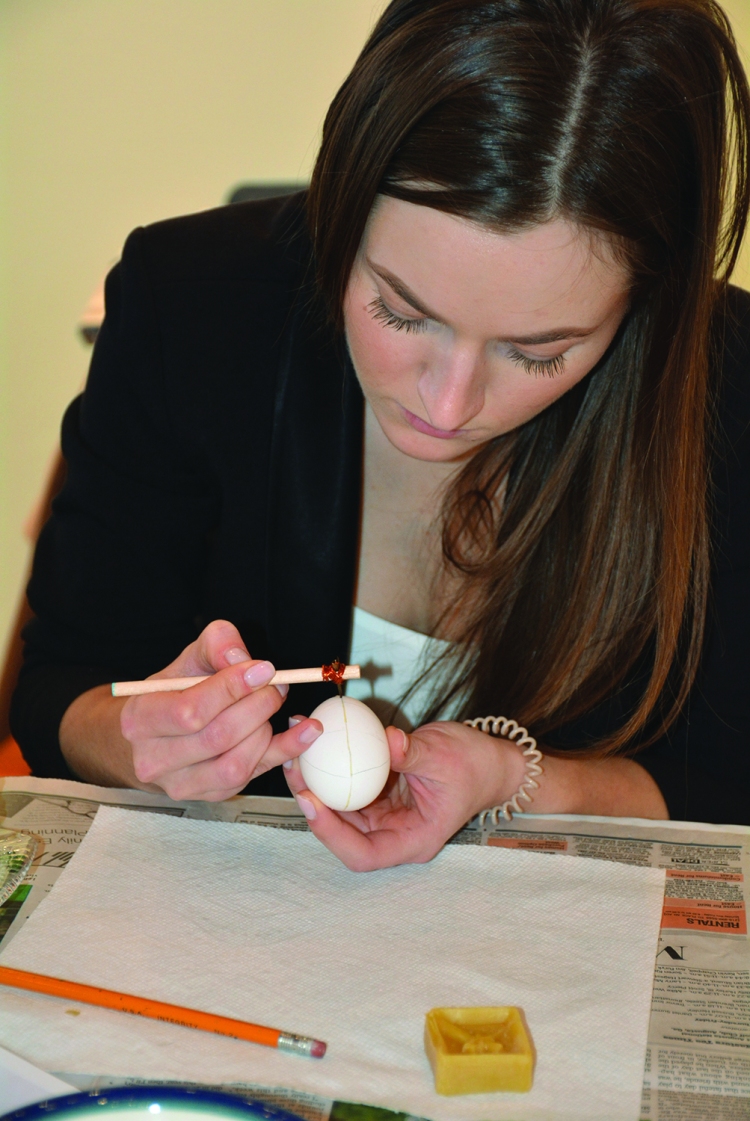 According to a pamphlet from the Museum gift shop, pysanka is an intricately decorated egg, created in the batik, or wax resist, technique. The art of pysanka-making predates written history and is thought to have been passed down from mother to daughter for millennia. Predating Christianity, pysanka-making was practiced by a pagan religious cult associated with the sun and springtime. These ancient pagans believed the egg possessed magical powers; it was symbolic of the sun in that it contained the brightly colored yolk, and it was magical because it could create and sustain life. The egg was believed to gain more power when drawings of mystical symbols with different meanings, were added on its shell. Once the egg was decorated with these symbols, it was regarded as a pysanka.

With the emergence of Christianity, the practice of pysanka-making was adopted and Christian symbols were added to the pagan repetiore of symbols. In the Ukrainian family, following the Lenten fast, a basket with the meal to be eaten on Easter Sunday was taken to the church to be blessed. Baskets included a pysanka which was never meant to be eaten but preserved for as long as possible.

Pysanka-making was traditionally practiced in the Ukraine until the U.S.S.R annexed the Ukraine and prohibited the practice — deeming the pysanka to be illegal religious writings. Books about the art form were removed from libraries, and exhibits in museums were destroyed. Individuals practicing the art of pysanky (plural of pysanka) could be imprisoned. By the time Soviet Union collapsed in the 1990’s, people knowledgeable about the ancient tradition were scarce.

On Friday, March 23, 2018, about 15 registrants gathered for an evening workshop in the gift shop of the Ukrainian Museum in Tremont to listen to Gift Shop Manager, Walter Ciszkewycz describe the pysanka-making process by which they would turn the raw eggs they brought from home, into pysanky.

The reason, Walter explained, for using a raw egg assures that the person decorating the egg will handle it gently, so as not to break it. Using a stylus, called a kistka, the artist scrapes beeswax into the kistka then melts the wax loaded inside, over a flame. The kistka is then ready to be used to draw designs onto the plain white egg. Once the waxed design on the egg hardens, the egg is dipped in the first dye which is usually lighter in color than the dyes to follow. The artist then draws more wax designs onto the dyed areas of the egg and it is dipped into a second dye of a slightly deeper color. The process repeats until the egg has been dipped into the deepest color of the artist’s choosing. Once the egg is dry, the raw contents of the egg are removed and the egg is then heated over a flame to remove the wax, and reveal the egg’s final design.

Following the description of the technique, Walter escorted the group to the workshop behind the museum to meet their instructor, Anastasia Koval, a resident of Parma who learned the art of pysanka as a young child from her Ukrainian mother. Anastasia explained that the art of pysanka-making is a dying art in the Ukraine and that she is the youngest person she knows that practices it here in the United States.

Among Anastasia’s students for that evening was Tremont resident, Tanya Lopatkina, who just three years ago migrated from the Ukraine. She said she was very happy to discover the Ukrainian Museum when she moved to Tremont and that she had never learned the art of pysanky in the Ukraine but she was eager to learn. Throughout the evening, her new teacher, Anastasia, communicated with Tanya, in Tanya’s native language, the technique for an art that that once thrived in Tanya’s beloved homeland.

Near west side resident of the Detroit Shoreway neighborhood, Jolene Adkins, another student in the workshop, tried her hand at the pysanka-making and designed an intricate egg creation of her own.

Assisting Anastasia was Walter’s wife, Gerry Ciszkewycz, who demonstrated a tool used to extract the raw contents of the eggs. The tool is used to pump air into the egg thereby displacing the contents through the hole in the bottom of the egg.

In addition to holding the yearly Pysanky-making Workshops, the Ukrainian Museum-Archives exhibits pysanky in the museum and sells pysanky in their gift shop. The exhibit can also be viewed along with a detailed history of pysanky on the museum’s website—umacleveland.org.

According to the website: “The Ukrainian Easter Eggs, ’pysanky,’ on exhibit at the Ukrainian Museum-Archives are the work of Ohio-based artist Tanya Osadca, who has generously donated them to the UMA’s collection. Each Easter egg, ‘pysanka,’ created by Ms. Osadca is a replica of an original antique ‘pysanka’ that has been documented as originating from a specific ethno-historic region of the Ukraine.”

Museum and Gift Shop Hours are: 10 AM to 3PM on Tuesday, Wednesday, Thursday, Friday and Saturday (and by appointment)