Antique car purchased for the price of a funeral

Ralph Vicario and his 1930 Ford Deluxe gets a taste of the car show world at their first car show. 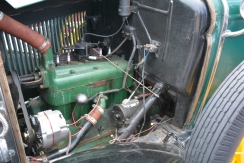 The 1930 Ford Deluxe interior was just like the engine-basic and simple.

Vicario’s story behind his antique is an unusual one, especially for anyone familiar with antique cars. Vicario shared that the Deluxe actually belonged to his brother-in-law until recently when Vicario “inherited it” when his brother-in-law became sick.

Vicario said that so far, the most he has invested in it other than gas, would be the cost of some steel wool to clean up some of the rust.

When asked about the specifics of his car, Vicario said that his is a Deluxe because it has two spare wheels on the car, one on either side. He said there was another model of the car that only featured one spare. According to Vicario, the car is still relatively original right down to its green and yellow paint job and rumble back seat.

Vicario says that the car is a blessing to have, as well as a lot of fun to own.