The Stockyard Bike-A-Thon took place on Saturday, May 19, 2018 at Clark School, 5550 Clark Avenue. Sponsors and partners of the Bike-A-Thon provided children under the age of ten with new bicycle helmets.

Stacks of different colored bicycle helmets wait to be fitted. 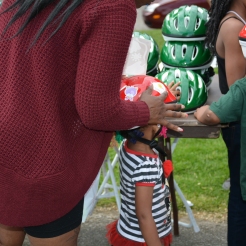 24 bicycles were donated for a drawing that took place after the bike-a-thon’s ride through the neighborhood.

Showing that Cleveland Police know how to have fun, Officer Kidd shows off his moves for the Cha-Cha Slide 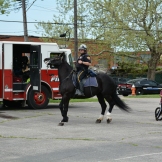 Dancing like no one is watching is Cleveland Police Mounted Unit Mandy.

Cleveland Fire Department were also on hand teaching the importance of fire safety.

Children of all ages enjoy riding their bicycles through the Clark School parking lot. 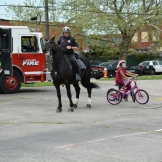 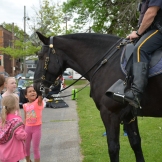 Mandy loves the attention she is getting from Julia and Lora Passafiume. The girls mother, Deborah Passafiume, grew up on a farm. 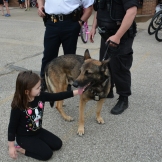 Hugo, a narcotic-certified K-9 is a German Shepherd mix from the Czech Republic and has been on the force for five years. 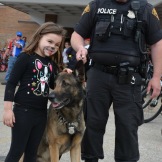 Aliyah Munoz, age 5, got to spend some time with K-9 Officer Doug Nichols and six-year-old Hugo.