(Plain Press, February 2019)          With the smell of hops in the air, residents of the Fulton/Lorain neighborhood gathered at the Platform Beer production facility Lesly Building on Vega Avenue on January 23rd to hear Councilman Kerry McCormack introduce guest speakers for the evening.

Final plans for Phase I of the Fulton Road reconstruction project were on tap for discussion. Phase II plans will be reviewed in March.

“There will be dust around this project, and inconvenience,” said McCormack. “It’s a massive road project. Please be patient.”

The $8 million project is expected to begin February 4th. Phase II design plans are currently underway, with reconstruction from Lorain Avenue to Detroit Avenue scheduled for later this year or early 2020.

Ward 14 Councilwoman Jasmin Santana addressed the thirty or so residents of this ethnically diverse west side Cleveland neighborhood.

“There’s nothing that makes me happier than residents engaged in projects that take place in our neighborhood,” she said.

McCormack, the youngest and first openly gay city council member along with Santana, the first Hispanic female council member in the city’s history, represent a new contingent of an otherwise stale body politic at city hall.

City of Cleveland Project Manager Angela Sanchez took the floor to explain that Terrace Construction Company will perform the work, based on acceptance of their bid submitted in the Fall of 2018.

Above the hum of conical stainless-steel fermenter tanks, Sanchez introduced TRC Engineers, Inc., the principal designers of the rehabilitation project.

“Major changes include reconfiguring Bailey Avenue, pull the intersection into the road, remove steel bollards, and clean up the area in front of the cemetery,” said a spokesperson from TRC. “The road will be removed, and the area will be a major site for the whole year.”

The intent is to maintain one lane of traffic in the southbound lane at all times during construction, according to the nationally known engineering and consulting firm.

“Modern day pavement markings will organize traffic with one lane in either direction when the project is completed,” they added, “and a bike lane will be added on each side.”

Sixteen trees along the route including nine old growth will be removed to make way for the Terrace Construction equipment, a necessity to complete the project efficiently, within budget, and on time.

The issue of tree removal raised concern among some residents.

“What’s the replacement plan for the trees?” a resident seated near the back of the room asked.

TRC paused a few seconds before answering. “There is no replacement plan for the trees.…we’re adding a grass lawn. The piece of equipment used to put the concrete down is wider than the road.”

Concurrent construction along West 41st Street with one-way traffic northbound raised questions about whether motorists will have to find alternative routes to cross from Clark Avenue to Lorain Avenue.

“The plan is to have the County bridge on West 41stopen for this detour to be in place. [The County] has confirmed they are going to have their project completed by February 1st,” Sanchez explained. “Don’t worry, we won’t set up our construction until that sufficiently coordinated.”

Deborah McKinney-Morgan was fine with the apparent construction schedule. She worried about access to her front door, with her house located on Chatham Avenue and Fulton Road, removal of the sidewalk meant she couldn’t get in.

“I was one of the fortunate or unfortunate people that had gas lines put in. We don’t have driveways where I live. When they tear up the sidewalks, they need to let us get into our homes.  I had a deep trench in front of my door.”

Terrace Construction Company responded that they would make sure residents can enter and exit their homes.  “We’ll try to notify everybody when we start tearing up the sidewalk. We’re not going to do it in the middle of the night or anything. If we think there’s an access issue, we’ll get together with you and come up with a game plan,” they said.

Traffic signal removal raised several issues about safety. Apparently, Federal guidelines were not met to keep the signals in place. Data was collected at every intersection, according to a City of Cleveland spokesperson, including traffic, pedestrian, bike counts, and heavy vehicles, and the intersections where traffic signals will be removed didn’t meet the thresholds needed for a signal.

“Having a signal where there shouldn’t be one can cause safety concerns,” they stressed.          Signals on Bailey Avenue and Vega Avenue will remain while Chatham Avenue and Monroe Avenue will be removed.

Not so, according to TRC.

“Traffic signals are not supposed to regulate traffic,” TRC responded. “They’re not used for speed control.”

Weekley wasn’t convinced. “I’ve been here decades. I travel Fulton Road many times a day. If you don’t have a light at Monroe Avenue, you’re asking for a huge mess. People come off that bridge and their cooking, man. I’m doing 35 and people are blowing passed me.”

“We’re changing the entire dynamics of the road,” said Cecil Benson, Inspector for the City of Cleveland. “The goal of this project is to change the perception of Fulton Road as a throughway. We want people to respect the neighborhood.”

Twelve-foot travel lanes and a six-foot bike lane on either side will reduce the width of the road from its current four lanes, to just two, plus the bike lanes. Bike lanes have been the subject of debate in road rehabilitation in recent years. Proponents in favor claim that bike lanes reduce traffic accidents while providing an alternative mode of transportation for cycle enthusiasts and those concerned about the environment. The cost of a five-foot bicycle lane can range from $5,000 to $535,000 per mile, with the average cost around $130,000, according to experts. Critics of bike lanes complain about less parking and more congestion.

Requests for information on the cost of adding bike lanes along the one-mile route went unanswered by the Terrace Construction Company. Kristyn Zollos, Development Specialist at Metro West Development Corporation could not provide an exact figure.

“They don’t understand,” said Weekley, shaking his head in disbelief. “Someone’s going to get killed if they remove those traffic signals.”

The meeting came to a close and people started to exit into the cold night.

“Probably doesn’t matter,” he added. “My property taxes increased 116% this year. I might have to sell my house. But that’s another story.” 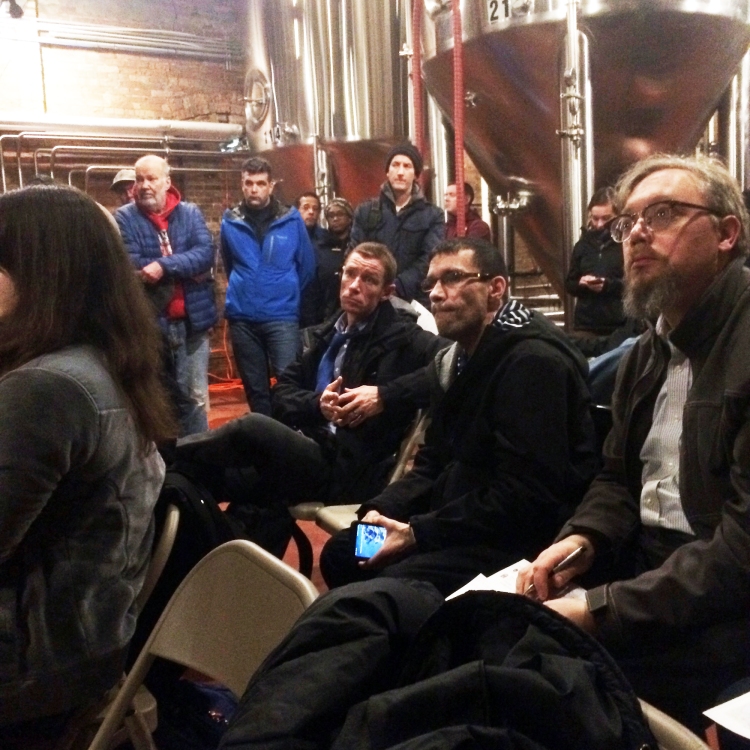