(Plain Press, February 2019)          Women from throughout Greater Cleveland converged on Public Square in downtown Cleveland for the Cleveland Women’s March on a cold wintry January 19. The march was one of many Women’s Marches being held throughout the United States. The Marches began three years ago the day after the inauguration ceremony for newly elected President Donald Trump.

The women gathered for the Cleveland Women’s March were joined by some men, children and even pets. About eight hundred Greater Clevelanders from diverse racial, ethnic, religious groups joined a Public Square in solidarity to support a wide range of causes represented with a variety of signs and banners. The signs and banners displayed showed some of the diversity of the groups involved in organizing the event as well as the various issues that concerned women and their supporters.

While the national news reported divisions in the leadership of the Women’s March, in Cleveland no such division was evident. In fact, many of those present espoused a philosophy of intersectional feminism. According to an article in The Telegraphby Ava Vidal, Intersectional Feminism is a term coined by American Professor Kimberlé Crenshaw in 1989. In her article Vidal quotes a textbook definition of Intersectional Feminism as being “The view that women experience oppression in varying configurations and in varying degrees of intensity. Cultural patterns of oppression are not only interrelated, but are bound together, and influenced by the intersectional systems of society. Examples of this include race, gender, class, ability and ethnicity.”

The mood was festive with creative colorful signs and banners throughout the crowd. Women from throughout Greater Cleveland braved the cold and snow to bring their messages to Public Square.

Corey Ringle of Shaker Heights and Sara Solomon of Lakewood brought signs celebrating their pride in the number of women elected to the House of Representatives in the midterm elections. Some of the women elected, say their journey to elected office began with the inspiration of the Women’s March three years ago.

Ringle and Solomon’s signs included messages front and back “Misogynists wanted us back in the kitchen, But Instead We took the House”; “They Tried to Bury Us. They Didn’t Know We Were Seeds”; and “Okay Ladies, Now Let’s Get in Formation” The hashtags on their signs were: #womenswave and #squadgoals.

Ringle and Solomon’s signs celebrate the Women’s Wave that began with the first Women’s March in 2017 which according to #WomensWave “inspired hundreds of women to run, millions more to vote, and dozens to win elected office.”

Chloe Muir, Erika Christy and Mikki Bratt, three teachers from Revere School in Bath Township, joined the march with signs showing their confidence in the next generation of activists they are working to educate. Their coordinated signs, with black ink on a pink background, read “Who Run the World? Girls. Ok Ladies, Now Let’s Get in Formation.”

Carmen Maldonado of Cleveland held a sign upon which she tried to list the many issues she is concerned about. The sign says: “Why I March: Reproductive Rights, Immigrant Rights, LGBTQIA, Environmental Justice, Religious Tolerance, Climate Change Action, Black Lives Matter, Health Care for All.”

Speakers from some of the groups spoke to the crowd prior to the march. Speakers stressed the importance of solidarity and action in an important time in history. They spoke of the importance of women of different religions, ethnic and racial background, and differing sexual orientations supporting each other.

A number of speakers spoke of their concern for children being taken away from their parents at the United States southern border. Samaria Rice, the mother of Tamir Rice, was one of the speakers who expressed heartfelt compassion for the children and the families they were being separated from at the border. Rice also talked about the foundation she has started in memory of her son which helps nurture young children in Cleveland.

The signs and banners being carried contained messages supporting immigrant rights, equal rights, reproductive rights, health care for all, LGBTQ rights, racial harmony, environmental justice, climate change action, science matters messages, messages about consent in relationships, ending sexism and harassment, voting, and a variety of anti-Trump messages such as “Trump Pence must go”; “Fascism Cannot Be Voted Out – The People Must Drive it From Power — RefuseFascism.org”; “The Blue Wave will Wash Trump Wall Away!”; and “Apprehend, Detain and Deport Donny”.

Messages on signs also celebrated the number of women elected to the House of Representatives in the mid-term election. These messages included links to hashtags such as #squadgoals, #womenswave, and #Intersectional Feminism.

Other visible signs included: “Yellow Peril Supports Black Power Black Lives Matter”; “Women Won’t Back Down”; “Vote – Use it or Lose”; “Governing Not a Game -Let’s Make a Deal – Get to Work- Let’s Return to Government Forthe People – League of Women Voters” “Trump/Pence Must Go!”; “Resist Ignorance”; “So Bad, Even Introverts are here”; “Orange Lies Matter”; “Families Belong Together”; “Stand with Black Women”; “I am a …woman, Not an object”; “Trans Women Too”; “If we can shatter the ceiling, Your wall will be noting on us”; “I Believe Dr. Christine Blasey Ford”; “Proud Immigrant from a Shithole Country”; “Americas Symbol For Immigrants Should Be the Statue of Liberty”; “Together we Fight for All”; “Injustice Anywhere is a Threat to Justice Everywhere – MLK”; “Women’s Rights are Human Rights”; “Keep Your Laws Out of My Exam Room”; “Our Rights are not up for grabs. Neither are we.”; “If You Want Peace, Work for Justice”; “The difference between a broken community and a thriving one is the presence of Women who are Valued – Michelle Obama”; “I am no longer accepting the things I cannot change, I’ m changing the things I cannot accept”; “Rape – Shame – Silence, #ME TOO, I will not be silenced — 201 and Counting…”; and “Science and Reason Matter.”

PHOTO BY CHUCK HOVEN
Saturday, January 19, 2019; Cleveland Women’s March, Cleveland Public Square: The crowd, while predominately made up of women, consisted of male supporters as well. 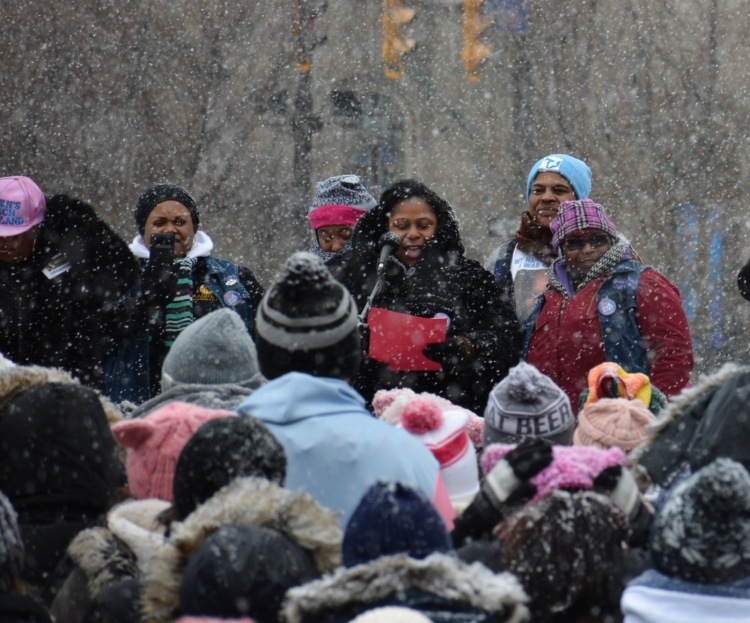 PHOTO BY CHUCK HOVEN
Saturday, January 19, 2019; Cleveland Women’s March, Cleveland Public Square: Samaria Rice, the mother of Tamir Rice, talks of the foundation she has setup in memory of her son who was shot and killed at age twelve by a Cleveland Police officer on November 22, 2014 at Cudell Recreation Center. Rice also expressed heartache at seeing children being incarcerated at the United States border with Mexico. 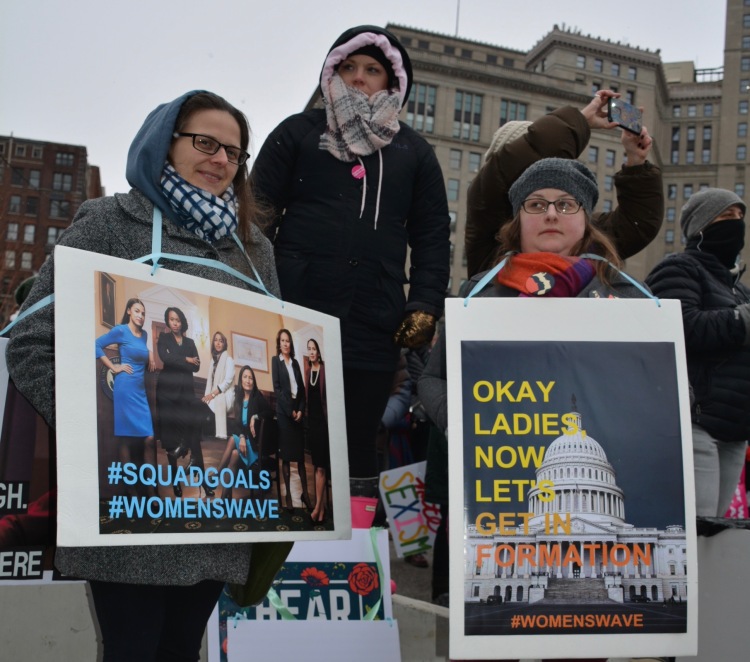 PHOTO BY CHUCK HOVEN
Saturday, January 19, 2019; Cleveland Women’s March, Cleveland Public Square: Corey Ringle of Shaker Heights and Sara Solomon of Lakewood are proud of the record number of women elected to Congress in 2018. They display hashtags #WomensWave and #SquadGoals on their signs.

PHOTO BY CHUCK HOVEN
Saturday, January 19, 2019; Cleveland Women’s March, Cleveland Public Square: The marchers head out from Public Square to carry their message through the streets of downtown Cleveland.