PHOTO BY CHUCK HOVEN
Tuesday, April 16, 2019; Beating Guns Tour co-sponsored by God Before Guns and Pilgrim Congregational United Church of Christ, Pilgrim Congregational UCC, 2592 W. 14thStreet: Terrance “Tank” Holden, who shared his story as a gunshot wound victim, hammers a metal piece from a melted gun just out of the forge that Mike Martin of the Beating Guns Tour holds on the anvil. They are making a small hand held plow called a mattock. The gun that was melted down was a semi-automatic weapon. 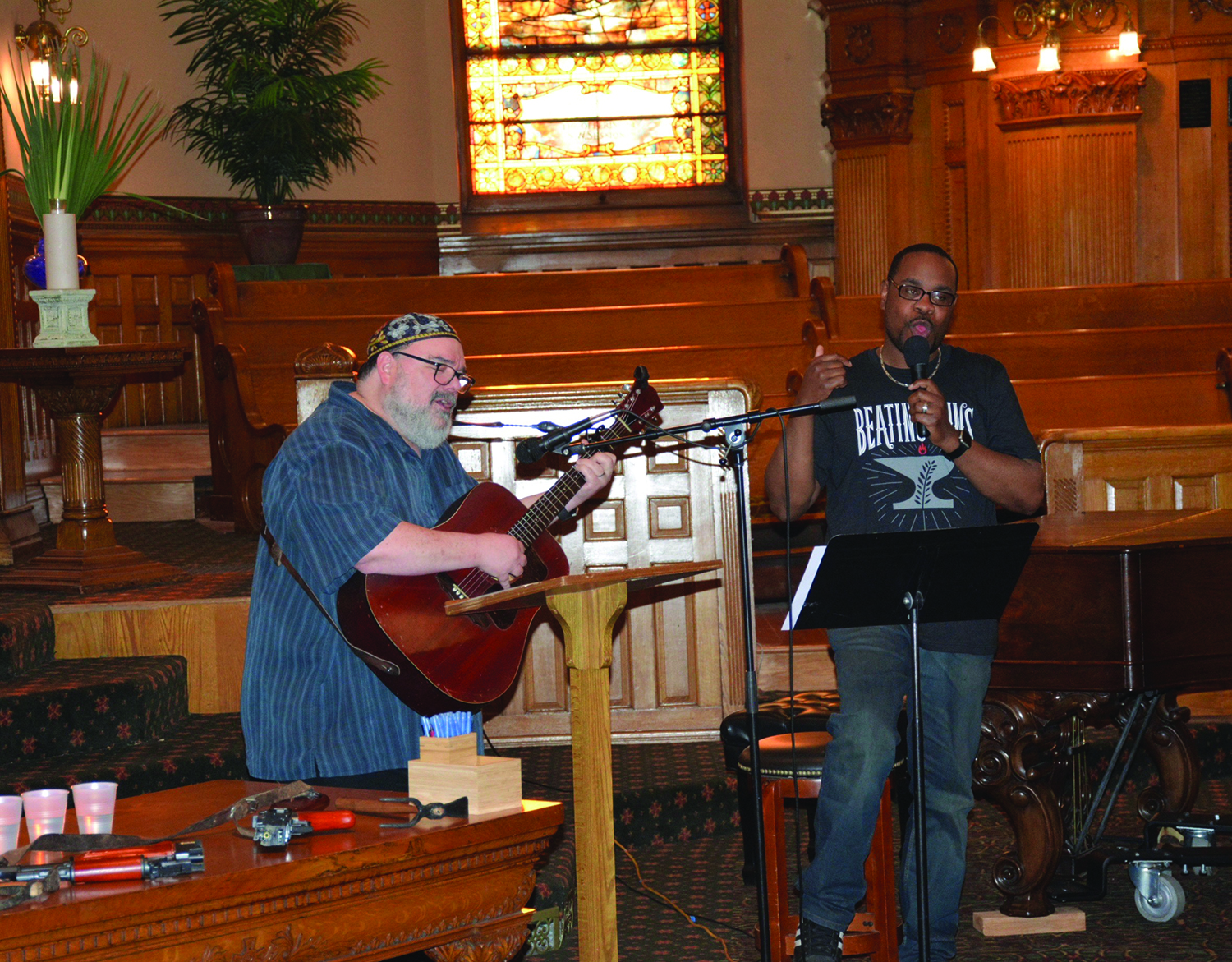 (Plain Press, May 2019)    Responding to the biblical passage in Isaiah 2: 4 “…and they shall beat their swords into plowshares, and their spears into pruning hooks;…” the Beating Guns Tour arrived at Pilgrim Congregational United Church of Christ on W. 14thin the Tremont neighborhood bringing along a forge to transform guns into garden tools. The tour is the brainchild of Shane Claiborne and Michael Martin, authors of the book,Beating Guns: Hope for People who are Weary of Violence.

Pilgrim Congregational Church joined with a group called, God Before Guns, to bring the Beating Guns Tour to Cleveland. About 150 people came to Pilgrim Church on April 16thto listen to speakers, share stories about how gun violence has affected their family, to listen to musicians perform and to witness the transformation of guns into garden tools.

Reverend Kristine Eggert, Co-founder of God Before Guns and Pastor Kelly Burd of Pilgrim Congregational Church welcomed the crowd. Eggert noted that God before Guns had invited people who have lived with gun violence to share their stories. She urged those in attendance to “stand on the side of life and listen to the hope and struggle of this city.”

Shane Claiborne and Michael Martin of the Beating Guns Tour were introduced as being on a 35-city tour joining with social justice advocates around the country to take a stand against gun violence.

Claiborne said in his home town of Philadelphia there are memorials throughout the city to people whose lives have been lost to gun violence. He said, “A 19-year-old died in front of our house in Philadelphia, we held his hand while he laid in the street dying.”

Martin held up an AK-47 chopped in half and quoted the passage from Isaiah “…they shall beat their swords into plowshares…” and noted that, in today’s world, guns are the modern equivalent of swords. Martin said the tragic slaughter at Sandy Hook woke him up. He began to search for another path and became a blacksmith working to turn guns into garden tools.  He said the metal from the guns will be used “to cultivate life, instead of taking life.”

Claiborne said their journey of inviting others to participate in forging plows from guns started when “Mike & I found a handgun in an abandoned house.”

The pair engaged in a public demonstration in Philadelphia outside Senator Pat Toomey’s office where they turned an AR-15 weapon into a plowshare. They said that Senator Toomey had come out strong for doing something about gun violence after the shooting at Sandy Hook Elementary School, but his language had reverted to “thoughts and prayers.” Claiborne said when the police arrested forty people at the demonstration, the police told them that they supported their efforts to get guns off the streets. Three weeks after their arrest, Claiborne said they were released without any charges.

David Eggert, a member of God Before Guns, and also the founder of Ohioans for Gun Safety, spoke of how he was able to purchase the AR-15 that was being forged into a garden tool at Pilgrim Church. He said the AR-15 is a military style assault weapon – the same model used at Sandy Hook. Eggert said he went online and was able to arrange with a seller to purchase the gun. He met the seller at an agreed upon location, showed him his driver’s license and made the purchase. There was no background check.  Eggert said the seller had no idea who he was and whether or not he was a felon. Eggart called for support of placing on the Ohio ballot a measure backed by Ohioans for Gun Safety to require background checks for all gun purchasers in Ohio.

Following Martin’s citation of statistics, Rev. Kristine Eggert of God Before Guns repeated something Mike Martin had said that morning on Cleveland Public Radio’s Sound of Ideas, she quoted Martin as saying, “The gun violence problem in this country will not be solved until it becomes personal.” To that end Rev. Eggert invited gun violence victims, survivors and their family members to come forward to tell their stories.

Judy Martin stepped forward first. She related the story of losing her son, Christopher Lee, in 1994 to gun violence. She said her son was 23 years old at the time. The person who shot him was 21 years old and has been in prison ever since. She said the loss of her son and the imprisonment of the person who shot him resulted in two huge holes in our society. Martin said that in Cuyahoga County we have lost 1,859 individuals age 25 and under to gun violence since 1990. Martin said the only group that reached out to her when her son was killed was Black on Black Crime. Martin said she has been involved with the group ever since and participates in a Black on Black Crime support group for survivors, victims and families that meets every Wednesday at 5:30 p.m. 15415 Kipling just off of St. Clair.

Jeanie McCalep said she wore red to this gathering to signify all the bloodshed in the street, and black to signify the cloud that has come over her family because of gun violence. McCalep said she had a cousin die of a gunshot wound in 1983. In 2005, her son was murdered, and her other son was shot five times, but survived. In 2009, she lost a nephew to gun violence and in 2018, her daughter was murdered. McCalep said there was a need for more mentors for young people and called for something to be done about violent video games. She said we should get rid of bb guns – they should not be given to children.

Terrance “Tank” Holden said an old guy pulled a gun on him and he struggled with him – fighting for his life. He said he ended up as a gunshot wound victim.

LaTonya Goldsby spoke of the killing of her 12-year-old cousin Tamir Rice by a Cleveland Police Officer. “Police Violence is gun violence,” she said. Goldsby said Tamir Rice’s death was not her first encounter with gun violence. She said many children in Cleveland grow up going to the funerals of gun violence victims. She said that two years after Tamir Rice’s death, her son-in-law lost his life to gun violence leaving her daughter behind pregnant with her second child. Goldsby said her son-in-law lost his wallet and somebody found it. When he went to meet the person to retrieve the wallet, he was shot and killed.

As the testimonies from residents flowed out to the audience at Pilgrim Church, they were accompanied by the guitar playing of Noah Budin of Cleveland and the singing of Rev. Jonathan Brooks of Chicago urging “love, peace, and prayer” and lyrics from Down by the Riversidedeclaring “Ain’t gonna to study war no more.”

A woman whose brother was killed at age 20 when he asked for insurance information after a traffic accident, spoke out against pursuing the death penalty for his killer. She said killing him won’t bring our brother back. She urged those present to “reject the myth that executions help victim’s families.” She said we should stop wasting resources on executions and instead provide resources to all victims and their families. She said her family would have benefited from having counseling following the death of her brother. The woman identified herself as a member of Ohioans to Stop Execution’s Journey of Hope

The Rev. Jack Sullivan Jr., Executive Director of Ohioans to Stop Execution’s Journey of Hope, said in 1997, his baby sister, Jennifer was shot to death with her two-year-old daughter in the home with her. He spoke of the experience of having to identify his sister at the morgue after the shooting and how that affected him. Rev. Sullivan said following the death of his sister he began to detest guns, “The only good gun is a melted gun. We have to work collectively to end Americans’ idolatry of guns – a modern day idolatry.” Reverend Sullivan urged those present to “Find guns and beat them & melt them into something productive, something good. Turn guns into something good by beating them into garden tools.”

After that testimony the crowd was ushered outside in front of Pilgrim Church to the forge where a gun was being melted. Each individual that had testified was invited to hammer on the metal from the melted gun as Mike Martin pulled the hot metal out of the forge and placed it on an anvil where participants could hit it with a hammer. Victims of gun violence and their family members were invited to call out the names of those lost to gun violence as they hammered on the metal from the gun – turning it into a gardening tool.

Others followed the family members. Chari Hettinger of the Church of the Epiphany said she was hammering “for all the people that are going to die before our country does away with guns.”

Following the work at the forge, those present were invited to come back inside of Pilgrim Church for some closing remarks.

Shane Claiborne of the Beating Guns Tour urged activism saying, “Good things come to those who get off their butts and make things happen.”

Michael Martin of the Beating Guns Tour held up a garden tool that had been forged at an event in Kent, Ohio, saying the small hand-held plow was called a Mattock. He said the metal that forged it had once been part of a semi-automatic gun. It had gone from “semi-automatic to Mattock,” he said.

Pilgrim Church Pastor Kelly Burd spoke to the crowd saying, “If you are a person of faith, don’t underestimate your calling to be a peacemaker.”

Rev. Kristine Eggert of God Before Guns said in the wake of so much gun violence in America “Thoughts and Prayers” will not suffice. She called for activism. She urged those present to get involved in groups such as Peace in the Hood, Black on Black Crime, Tamir Rice Foundation, Ohioans to Stop Executions, God Before Guns, and Ohioans for Gun Safety. “Never doubt you can make a difference,” said Eggert.

Eggert urged those present to fight gun bills HB 174 and HB178 that would establish “constitutional carry” in Ohio by abolishing the present permit system for concealed carry of firearms.

Editor’s Note:The book, Beating Guns: Hope for People for People Who are Weary of Violencecan be ordered at BeatingGuns.com. More information on the group God Before Guns can be found at godbeforeguns.org.