Customers voice concerns about how Cleveland Public Power treats them

Customers voice concerns about how Cleveland Public Power treats them

(Plain Press, November 2019)        Cleveland Public Power (CPP) customers brought concerns about the services and practices of the power company to a public hearing held on October 17th. The hearing was hosted by the End Poverty Now Coalition and held at St. Paul’s Community Church at 4427 Franklin Boulevard.

Demonstrating the number of people with concerns about their utility bills, a volunteer at St. Paul’s, said the church has an outreach program four days out of the week, from 9 a.m. till noon. “Not a day goes by that we don’t have someone come in asking for help with utility bills,” said the volunteer.

Concerns brought to the meeting included customers being denied the opportunity to go on a payment plan; customers whose power was shut off even though they told CPP staff that they had a person in the house for whom electricity was medically necessary; customers who testified they did not receive any notice before their power was shut off; customers complaining that the rates were too high; customers that complained about the lack of compassion that was exhibited by CPP employees when they called about a shutoff; and customers who were concerned that power outages endangered the health and safety of community members.

Customers said they expected more from their public utility. They expected compassionate customer service and an effort to keep rates low as possible.

Phil Althouse from Legal Aid explained the City of Cleveland Ordinance 523.11 which governs how Cleveland Public Power delinquent accounts are terminated. (The ordinance can be found online by googling Cleveland Codified Ordinances and searching for 523.11). Organize Ohio staff present at the meeting also passed out a summary of the City of Cleveland rules governing termination.

Customers say when they called Cleveland Public Power to inform them that they or a member of their household had a medical condition requiring use of electrical power, they were not given information about the requirement to notify Cleveland Division of Light and Power in order to avoid shutoff.

Joyce Manz, a customer of Cleveland Public Power, offers an example of her interaction with CPP. Joyce Manz says, “We had a disconnection notice and I was working on trying to get that paid, when without warning we were shutoff, no red tag, no notice, no knock at the door. So, in a panic, because my sister-in-law needed her oxygen, I called and asked why we were turned off without a warning, and explained that we had a medical person in the house. I was told that even if there is someone that medically needs electric, it does not stop you from being disconnected”.

Contrary to what residents were saying about heating assistance, Perry said, Cleveland Public Power does have Home Energy Assistance Program (HEAP) funds for customers. She said customers can receive up to $550 per person. She said currently 4,316 CPP customers use HEAP.

Perry said CPP customers looking for help to sign up for HEAP, Winter Crisis, Summer HEAP can call CHN Housing Partners, or the Council of Economic Opportunities of Greater Cleveland. Senior citizens can receive help from the Cleveland Department of Aging.

Perry also noted that the Department of Veterans Affairs covers 100% of utility costs for qualified veterans.

Perry suggested the Ohio Development Services Agency is another source of information about energy assistance. Residents can go to their website to find out about energy assistance programs (www.development.ohio.gov). She said the only program Cleveland Public Power does not participate is the Percentage of Income Payment Plan (PIPP) which is paid for by utility rate payers and is not included in CPP’s rates.

Responding to complaints by customers that Energy Adjustment charges were doubling their utility bills, Perry explained the charges reflected the cost of transporting energy from sources that generate electricity to Cleveland Public Power stations.

A resident asked if Cleveland Public Power could seek less costly and more local sources of power, perhaps placing solar panels on customers’ homes. A check of the Energy Adjustment Cost charges by a resident who saved their billing statements indicates that the cost per kilowatt hour has increased from .040855 in 2009 to .0780620 in 2019 – nearly doubling in ten years.

Keane, who chairs Cleveland City Council’s Utilities Committee, spoke briefly. He noted that Cleveland Public Power was a small power company with only 75,000 customers whose goal was to provide reliable power for its customers.

In wrapping up the meeting, St. Paul Community Church volunteer Tim Walters noted that there were resources out there to assist people with utility bills such as HEAP and the program for Veterans. It was suggested that End Poverty Now or Organize Ohio place such information on one of their Facebook pages. It was also suggested that if people have problems with Cleveland Public Power staff not following the rules set by Cleveland’s Codified Ordinances that they call their City Council Representative to file a complaint. 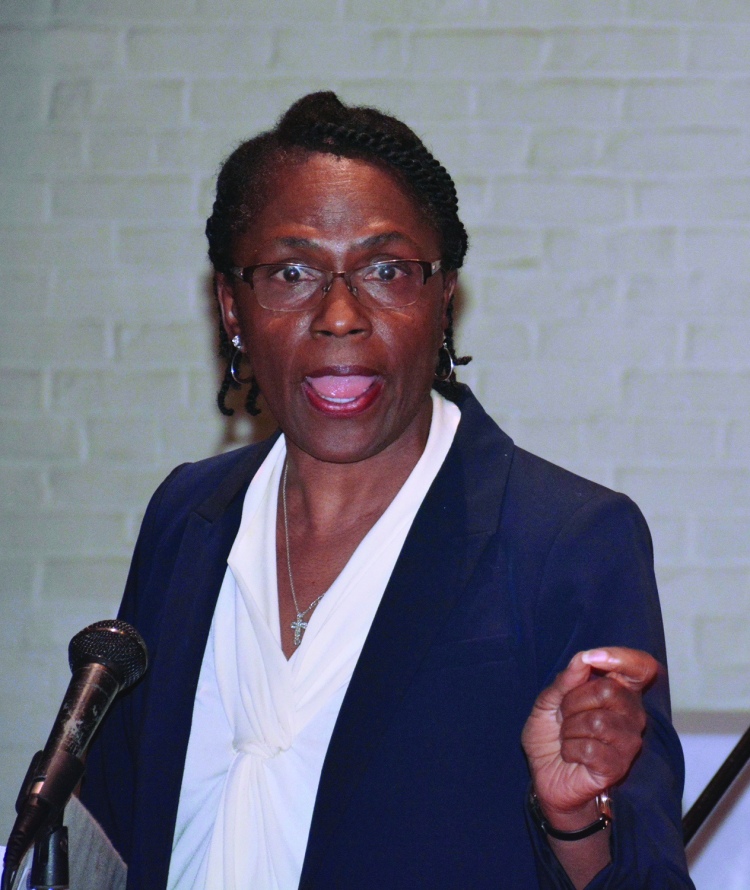