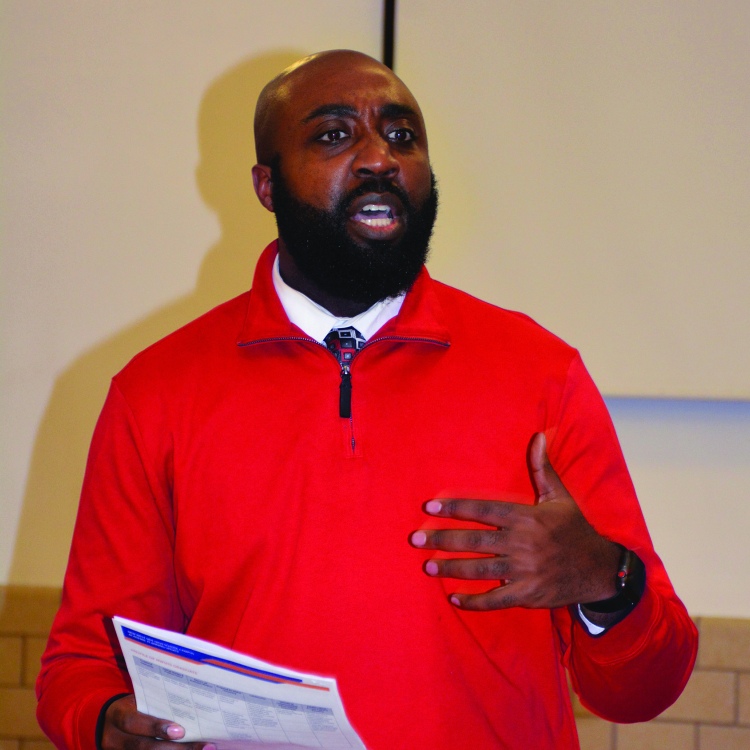 Thursday, December 5, 2019, meeting about the new west side high school at Garrett Morgan High School, 4016 Woodbine Avenue: Anshawn Ivery, who will serve as principal at one of two high schools located in the new school building at 4600 Detroit Avenue, gives an overview of the liberal arts curriculum at a new high school which he says will offer pathways in mass communication and social justice. 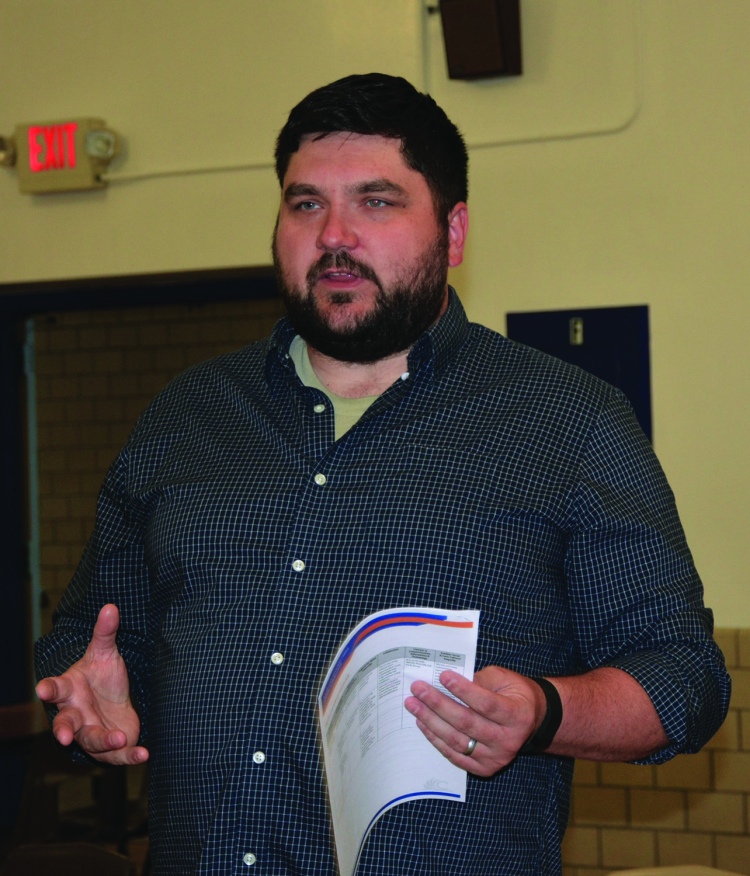 Thursday, December 5, 2019, Meeting about the new west side high school at Garrett Morgan High School, 4016 Woodbine Avenue: Near West Side resident Brent Eysenbach, a member of a committee of residents, teachers and stakeholders that has been meeting since May to work on designing a curriculum for a new west side high school. The new school is now recruiting ninth grade students for the 2020-21 school year. The school, which has not yet been named, will offer a liberal arts curriculum with an emphasis on social justice and mass communications.

(Plain Press, January 2020)    Residents attending a community meeting at Garrett Morgan High School on December 5th learned about the academic programs to be offered to two high schools that will be located inside the new school building at 4600 Detroit Avenue. The new building is scheduled to open in August of 2020. Garrett Morgan High School will move into the building from its present location on Woodbine Avenue. The new building will also house a yet to be named high school that will offer a liberal arts curriculum while offering students the opportunity to focus on the study of communications or social justice.

Brent Eysenbach, a community resident serving on the committee of residents, stakeholders and teachers developing the academic program for the new high school, says the plan is for the new school to have an emphasis on the arts. It will prepare students for college or a career in the liberal arts. Eysenbach says there will be a focus on social and racial justice, and experiential learning.

Students will be asked to “think locally, and act locally,” Eysenbach said. He noted, the  Academic Design Team envisions students “engaged with stakeholder groups.” They will “take what they are leaning and understand it through the lens of the community they are living in.”

Eysenbach, who has a background in urban geography, cited gentrification and the impact of past redlining by banks and insurance companies, as some issues that students could study as they learn about the world through examination of the neighborhoods in which they live.

Cleveland Metropolitan School District Director of Arts Education Jeffery Allen says the community expressed their wishes that arts be part of the new high school. He says plans call for connections with the community theatres, galleries and arts-based organizations in the neighborhood.

Anshawn Ivery, an assistant principal at John Marshall School of Information Technology, will be the principal of the new high school. Ivery says the curriculum at the new school will be inquiry based and arts infused. He said students will be looking at how choices impact progress. They will use the investigative tools of journalism to examine social issues.

Ivery says the academic plan calls for students to have a half day internship in their senior year.

Davis urged students and parents to consider Garrett Morgan as their high school of choice. He boasted of the quality of the academic programs the school is currently offering saying, “I am willing to put our Bio-Med and Engineering programs up against any in the school district.”