Saturday, January 18, 2020; Women’s March Cleveland 2020, Cleveland City Hall, E. 6th and Lakeside: As marchers head from City Hall to Public Square, this woman demonstrates her appreciation of the importance of journalism in helping to sustain a democracy. 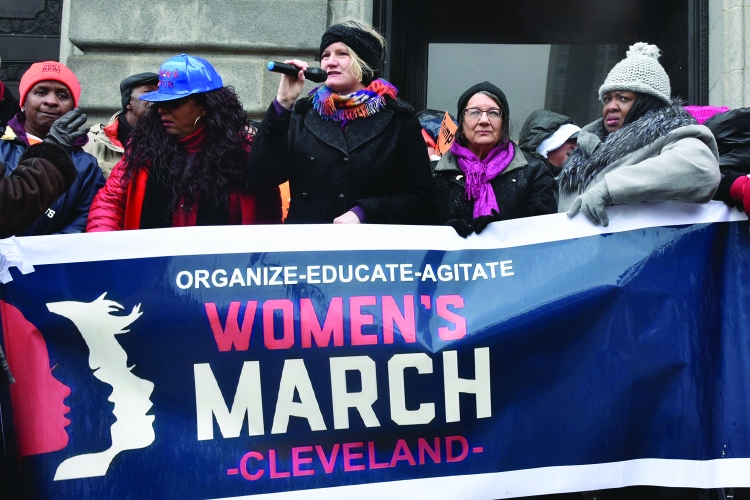 (Plain Press, February 2020)          Over 300 people gathered on the steps and sidewalks in front of Cleveland City Hall enduring a cold steady rain, Saturday January 18th, to participate in the Women’s March Cleveland 2020. Prior to the march, speakers addressed the crowd. A range of social justice and women’s rights issues were addressed.

Speaker Bishop Tony Minor spoke of the importance of Dr. Martin Luther King Jr. to the women’s movement and the civil rights movement.

Violence against women was addressed by a number of women and men in attendance at the march, including representatives of Black on Black Crime, the Imperial Women Coalition and Black Man’s Army. Activist Alfred Porter Jr. read off the names of the eleven women murdered on Imperial Avenue by serial killer Anthony Sowell as well as other women killed or kidnapped in Cleveland. Kathy Wray Coleman, lead organizer for the Women’s March Cleveland 2020, called for the Ohio Eighth District Court of Appeals to deny a motion by Sowell’s attorneys to appeal his conviction.

Cleveland Rape Crisis Center President and Chief Executive Officer Sondra Miller also addressed the issue of violence against women. In her speech, she noted that one in five women are victims of rape or sexual assault during their lifetimes.

Voter registration, political activism and a political agenda of inclusion were also topics at the rally.

State Senator Nickie Antonio (Senate District 23) and State Representative Juanita Brent (District 12) both spoke of the importance of women being elected as public officials. Antonio noted she was the first woman to hold a Senate seat in her district. Brent urged those present to call their representatives to gain their support for legislation calling for a $15 minimum wage in Ohio.

It was noted that 38 states have now ratified the Equal Rights amendment to the Constitution and organizers called for Congress to extend the deadline for states to ratify the proposed amendment.

Activist Lois Romanoff spoke of the importance of amending the United States constitution to end corrupting influence of corporate dollars allowed by the Supreme Court decision in the case of Citizens United.

Activist Valerie Bai, representing The Coalition to Stop the Inhumanity at the Cuyahoga County Jail, called for a variety of reforms to address the crisis at the local jail. Reforms she called for included: bail reform, prosecutorial reform, improved living conditions inside the jail, a pre-booking diversion center to prevent future jailing of people struggling with mental health or addiction, and access to diversion regardless of ability to pay.

Other issues addressed by speakers included women’s reproductive rights, LGBTQ rights, and the need for a welcoming and compassionate treatment of immigrants. Members of Refuse Fascism spoke about the current critical need for activism.

Others in the crowd brought their own concerns to the rally via their signs.

Rosie Palfy and her boxer Blue sought to bring attention to the Metanoia Project’s efforts to continue using Denison United Church of Christ as a place for refuge from the cold for Cleveland’s homeless and heat deprived population. Palfy’s sign called out as missing Ward 11 City Council Representative Dona Brady, who has opposed the use of the church as a night-time shelter. Palfy says she is a veteran, who was homeless for 2 ½ years. She credits help available to veterans as helping her to turn her life around, but says those resources are not available to everyone, she said.

As the crowd prepared to march to Public Square, a seventeen-year old Cleveland Heights High School Senior inspired the crowd with her singing of the song, “Girl On Fire.”

Editor’s Note: The annual women’s marches began in 2017 in response to the inauguration of President Donald Trump. Women’s March Cleveland 2020 resulted from a grass roots organizing effort led by local activist Kathy Wray Coleman. More information about the march can be found on Coleman’s blog or the Cleveland Urban News website. Coleman blogs at: kathywraycolemanonlinenewsblog.com; the Cleveland Urban News website is at clevelandurbannews.com.