Mary Rose Oakar, a regular West Side Market shopper, says she heard “there are people who want the stands but have been told they can’t have them.”  She says she talked to Manager of Markets Felicia Hall and was told by Hall that she wanted more diversity at the market as the reason for turning down applications from new vendors. Hall could not be reached for comment.

Indeed, Hall has placed signs for New Vendors in the West Side Market that are calling for some non-traditional types of vendors. The signs say, “Products to be considered include: Fresh baked goods, Hot and cold non-alcoholic beverages, High-quality pre-packaged foods (salads, soups, various food bowls, etc.), Trees and plants, Holistic healing and beauty items made from food products (i.e. soaps, lotions, etc.), Cooking tools and utensils, Fresh produce from orchards and farms.”

In addition to the losses of vendors in the fruit and vegetable stands, conditions inside the Market Building are dire as well. Rents are rising while service from the landlord is terrible. Diane Dever says their heaters were taken away a number of years ago and never replaced. She says, on cold days, the indoor merchants are working in stands where the temperature is in the 40s.

Another indoor market merchant, Annemarie Geffert of Annemarie’s Dairy, left the West Side Market in January. Geffert, who grew up working at the West Side Market, said she was sad to go. She left a note in her stand saying good-by to customers and her fellow merchants. Geffert, who ran her stand for 22 years, not only sold dairy products, but also provided specialty items for vegetarians and vegans.

Several years ago, then President of the West Side Market Merchant Association Vince Bertonaschi talked about the City of Cleveland wanting to make the West Side Market into a boutique for tourists rather than a see it continue in its tradition as a food market. That plan seems to be unfolding.

Bertonaschi also fought the City of Cleveland’s Board of Zoning Appeals failure to enforce rules that required a certain number of parking places for new bars and restaurants locating in the neighborhood. The bars and restaurants instead were allowed to use the West Side Market’s parking lot. This led to overcrowding in the lot with restaurant employees and customers parking in the lot for hours at a time. Many market customers could not find spaces in the lot during market hours. Bertonaschi said merchants were losing long time customers because of the inconvenience. Bertonaschi eventually closed his stand, Vince’s Meats, – tired of fighting the landlord, the City of Cleveland, over poor service, raising rents and trying to push the market into being a tourist location rather than a food market.

Now, the City of Cleveland is charging for parking over 1 ½ hours in the market parking lot. While this has cut down on many of the all-day parkers, it also makes what for many families was a morning at the West Side Market, a less attractive option. Visiting a neighborhood restaurant, leisurely talking to merchants while getting the week’s groceries with the family in tow is being replaced by tourists and more of an in-and-out crowd trying to beat the time on the parking lot ticket. 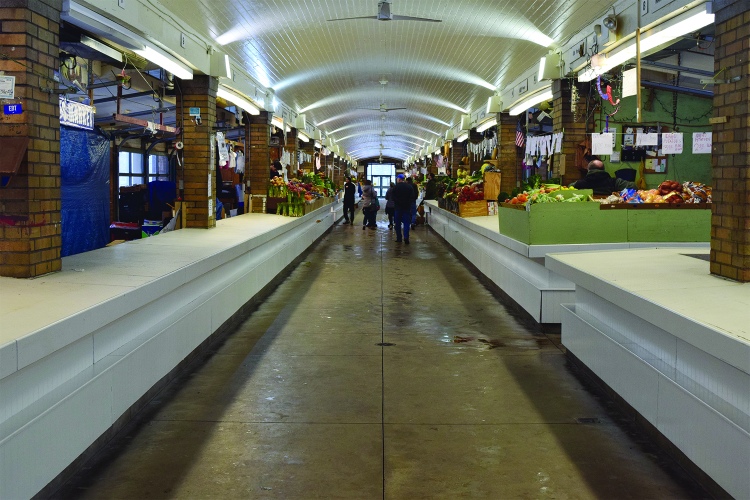 PHOTO BY MICHAEL OAKAR
Saturday, January 19, 2019, West Side Market, W. 25thand Lorain Avenue: Many stands are vacant on a Saturday, something that was unheard of just a few years ago.