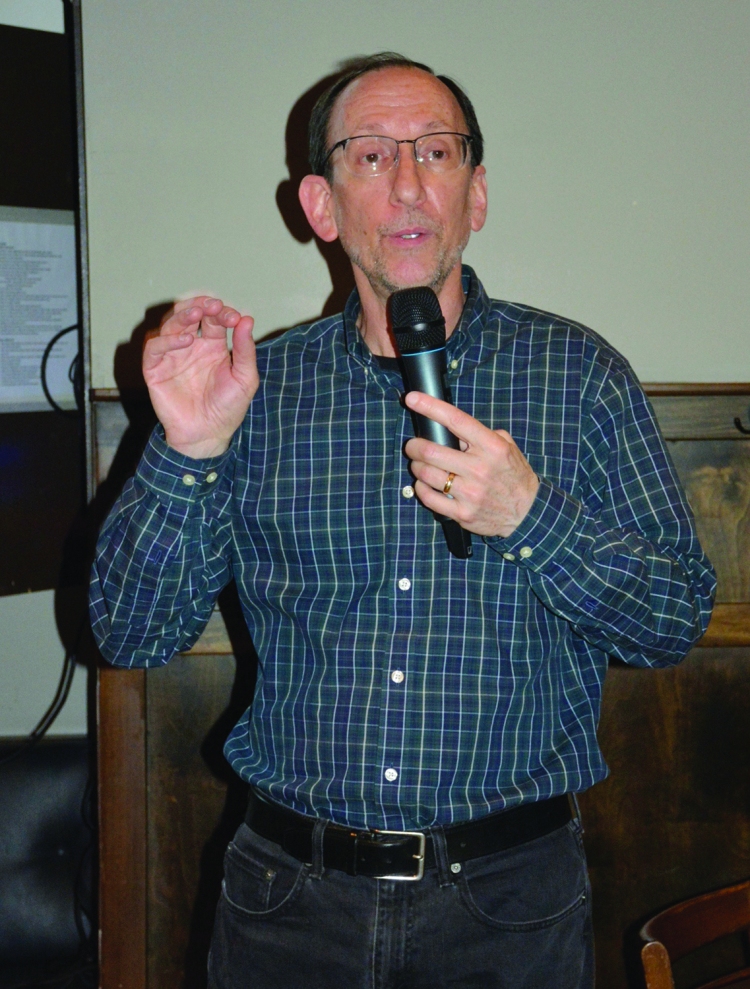 (Plain Press, May 2019)    David Beach, writer, activist, former director of the Green City Blue Lake Institute, and the guest speaker at the April 9thmeeting of Cleveland Peace Action, spoke on the topic of climate change and political change. At the meeting held at the Market Garden Brewery on W. 25thStreet, Beach offered an update on the Green New Deal and a history that focused on what he called “the most existential crisis of our time” – climate change.

Beach said that thirty-one years ago, National Aeronautics and Space Administration (NASA) Scientist James Hansen warned that rising carbon dioxide levels were a real threat to our future. Beach said that the crisis of climate change is different from that of nuclear annihilation. “With the threat of nuclear weapons,” he said, “someone has to do something for a catastrophe to occur. With climate change, the deadline is imposed by nature.”

Beach encouraged those present, a mix of Near West Side residents and Cleveland Peace Action members, to view two important reports released at the end of last year.

The second report, which Beach says contains some useful information, is the Fourth National Climate Assessment available on the government website at wwww.globalchange.gov/nca4.

Beach said the main thing to take away from these reports is “the science is stronger than ever. We know that Climate Change is happening faster now than any time in history.” Beach said that the IPCC report indicates a substantial difference in Climate Change between a temperature rise of 1.5 degrees Celsius to 2.0 degrees Celsius. With a rise of 1.5 degrees Celsius there will be less storms, less loss of ecosystems, and less flooding, droughts, extreme heat, sea level rise, water scarcity, coral bleaching, human poverty and displacement.

Beach said a goal of reducing carbon emissions by 45% by 2030 and net zero emissions by 2050 would have huge benefits and help make a transition in time to create a reduction in the catastrophic climate disruption we are currently facing. A move toward a green economy would create good jobs, better health, and lead to the preservation of nature, said Beach.

Climate Change is already contributing to the United States Southern border crisis, said Beach. He said rising temperatures have led to the drying out of the highlands in Guatemala, causing people to migrate north.

The Lake Erie Allegheny Partnership for Biodiversity predicts a severe impact in Northeast Ohio from high concentrations of carbon in the atmosphere if nothing is done to address it, said Beach. Local predictions include 5.2 more inches of precipitation per year, and an 11-degree Fahrenheit rise in the mean annual temperature Plant hardiness zones will shift two full zones, and the number of days with temperatures above 86 degrees Fahrenheit will be equivalent to four months out of the year. One third of the tree species in our area would be less able to survive.

Beach said the Green New Deal, legislation proposed by United States Representative Alexandria Ocasio-Cortez of (D-14) New York and United States Senator Ed Markey of Massachusetts calls on Congress to appoint a Select Committee to draft legislation for a national ten-year mobilization to get to net zero greenhouse gas emissions. The proposal also calls for an attack on economic inequality. Beach says you can’t do one without the other as the frontline communities impacted by climate change will be the most vulnerable low-income communities. The bill, House Resolution 109, is available for viewing at: www.congress.gov/bill/116congress.

Beach took a stab at some of the criticisms of the Green New Deal – i.e. cost too much, no more cars/hamburgers, naïve, wait your turn, elitist, government programs aren’t the solution, and it trying to do too much – it should just focus on energy.

Speaking to the cost of not addressing climate change, Beach noted the number of billion dollar plus disasters in the United States in just the past year. He said, “there is nothing elitist about this. This is a fight for survival.” Beach also showed a chart from the United States Energy Administration that computes levelized cost and levelized avoided costs of different energy sources that shows that the cost of wind and solar are much cheaper than coal.

In speaking about how to bring about political change, Beach said, “It will take a mass mobilization to make this happen.” He called for both mobilization, and contacting Congressional representatives. He noted that no Ohio Congress people have signed on to support the Green New Deal. Beach said, “We should be pressing them.”

While fear of the impact of climate change is mounting as a motivator for change, Beach said, “We also have to show hope.” As a sign of hope for the future, Beach cited the efforts of 16-year-old Swedish Student Activist Greta Thunberg who is leading a global strike by students to protest the inaction of politicians in dealing with the climate crisis.

Beach read a passage published in the Guardian on March 1, 2019 from the Global Coordination Group of the Youth-led Climate Strike inspired by Thunberg which starts out saying: “We the young are deeply concerned about our future. Humanity is currently causing the sixth mass extinction of species and the global climate system is at the brink of a catastrophic crisis. Its devastating impacts are already felt by millions of people around the globe. Yet we are far from reaching the goals of the Paris agreement…”