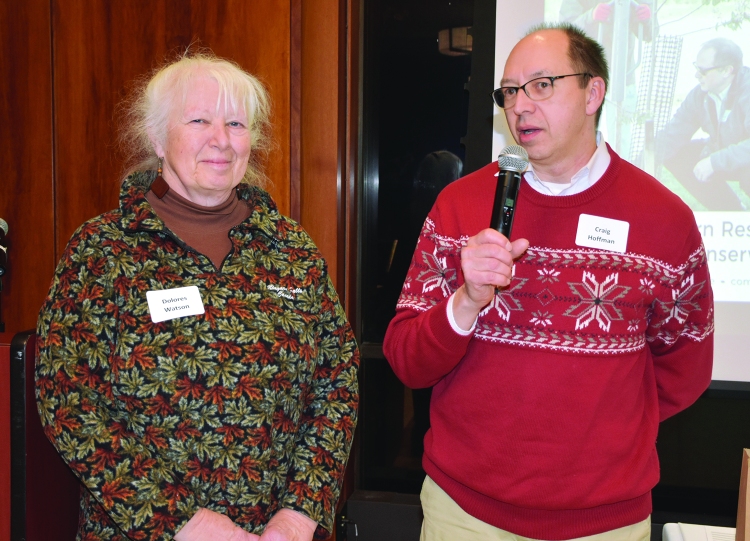 (Plain Press, March 2020)  Deloris Watson of the West Side Tree Stewards and Dan Leamon of the Tremont Tree Stewards were among the graduates of the Sherwick Tree Steward Training Program being honored at an appreciation ceremony held by Holden Forests and Gardens and the Western Reserve Land Conservancy. The February 6th ceremony, at the Cleveland Botanical Garden in the University Circle neighborhood, offered an opportunity for Tree Stewards to tell about their efforts to help restore Cleveland’s tree canopy and share their plans for the upcoming year.

Staff members and volunteers from Holden Forests and Gardens, and the Western Reserve Land Conservancy also shared information about the progress of the Cleveland Tree Plan and efforts to help increase the local tree canopy.

Watson said this past year, the West Side Tree Stewards planted trees on Pear Avenue and a few on Madison Avenue. She said Craig Hoffman and six members of the West Side Tree Stewards helped with the effort. She said, Hoffman engaged neighbors, asking their help in identifying places to plant trees. Watson said volunteers from Calvary Church on W. 65th Street helped with the planting.

This coming year, Watson said West Side Tree Stewards plan to use the West 65th Rapid Station in the EcoVillage as a starting point and fan out South, East and West from there to find locations to plant trees. She said she would be contacting other tree stewards for help in planting once the group has a planting date and places to plant.

Dan Leamon of the Tremont Tree Stewards spoke of the efforts of his group to care for trees in Lincoln Park and near the Christmas Story House on W. 11th this past year. Leamon showed those in attendance the tree watering cart he built to carry water to young trees planted in the middle of Lincoln Park. Leamon said he hopes that the Western Reserve Land Conservancy can partner with the City of Cleveland to plant trees in the coming year. “If the city is interested in planting trees, let’s make it happen,” he said. Leamon noted the 16-foot-wide tree lawns in parts of the Tremont neighborhood that would make prime locations for planting trees.

Courtney Blashka of Holden Forests and Gardens, speaking to the graduates of the Sherwick Tree Steward Training Program, said the program is designed to connect people to trees and “inspire you to take action to make your community more livable.”

Jill Koski, President and Chief Executive Officer of Holden Forests and Gardens thanked partners in the Cleveland Tree Coalition for their efforts to help get “us back to be the Forest City we used to be.” Partners engaged in the Cleveland Tree Plan include the City of Cleveland, Cleveland Neighborhood Progress, Holden Arboretum, LAND Studio and Western Reserve land Conservancy.

The Cuyahoga County Urban Tree Canopy Assessment notes that despite gaining over 1,200 acres of new tree canopy, the City of Cleveland had a net loss of 1,600 acres of canopy from 2011 to 2017. The city of Cleveland now has a tree canopy measured at 17.9%, well below the Cuyahoga County average of 34.7% for existing tree canopy. The assessment report defines tree canopy as “the layer of leaves, branches and stems of trees that cover the ground when viewed from above.”

At the conclusion of the ceremony, Lizzie Sords of the Western Reserve Land Conservancy noted that an April 25th gathering at Zone Recreation Center will kick off this year’s efforts to grow Cleveland’s Tree Canopy. The day will include information of funding available through the City of Cleveland for tree planting on tree lawns throughout the city, instruction on tree plantings, and tree give-a-ways.